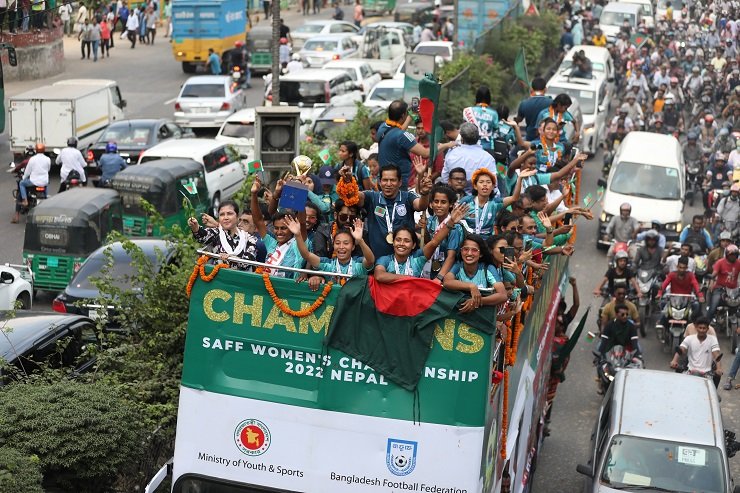 Win the country by bringing the title

Playing in the Himalayan country and winning the title by defeating the hosts is not so easy – everyone will be forced to agree. This time the girls of Bangladesh have achieved the impossible. The red-green team won the final at the Dashrath Rangshala by playing football in a valiant fashion against Nepal. Bangladesh women’s football team became the champion of South Asia for the first time with a great victory of 3-1. Everyone is floating in this joy. Sabinas won not only the title, but the whole country.

The queens returned home yesterday. Sports lovers waited for hours at Hazrat Shahjalal International Airport to welcome them. Sabinara has gifted the people of Bangladesh with a coveted title for a long time.

Sabinara is now a role model. Many young women vowed to take the game more seriously when they came to greet the champions at the airport. Breaking down the social barriers that are now entrenched in different parts of the country. At the airport, BKSP student Sumaiya Sultana Bithi said, ‘Our elder sisters have become champions. We are here to welcome them on behalf of BKSP. Football, archery, judo, athletics players are here. Their win will definitely give us motivation.’

In the first match of this year’s women’s SAFF championship, Bangladesh girls showed their superiority by defeating Maldives 3-0. In the second match, the Pakistan women’s team was blown away by a 6-0 margin. And the five-time champion beat India 3-0 to become the best in the group in the semi-finals. Sabinara played more fast-paced football in the match of four. Where the victory against Bhutan came with 8-0 goals. In the final, the students of Chotan Rabbani Chotan took the desired title by breaking the dreams of the girls of the Himalayan country.

People from all walks of life were eagerly waiting at the airport to welcome the Tigresses. Common people called Dhal at the airport. Then the plane carrying Sabina landed at Hazrat Shahjalal International Airport at 1:50 pm yesterday with the title. A colorful reception was then given at the airport. At this time, Buffe officials made them sweet. State Minister for Sports Zahid Ahsan Russell welcomed the entire team by eating cake and wearing flower garlands. There team leader Sabina said, ‘This is the best achievement of my career. Its feelings are difficult to express in words. Returning home with a win. The countrymen are waiting with great eagerness. We are also waiting with interest. ‘

Bangladesh women’s team has brought the countrymen the long elusive title. So as the accolades are pouring in from all sides, the award announcements are also starting to come. The Bangladesh Cricket Board (BCB) has announced a prize of half a crore or 50 lakh taka for the Bangladesh women’s football team for winning the history-making Safar trophy. This is the first time that any organization has announced a big reward for tigresses.

Just what? Bashundhara Group, a well-known company in Bangladesh, has joined hands with Bafuf. Of course, this victory is a great achievement for them. Because, among the 14 footballers of the Bangladesh women’s team who played in the final of the SAFF Championship, 13 were from Bashundhara Kings, the own club of Bashundhara Group.