Who cut the flag of Argentina? Written complaint to the police station 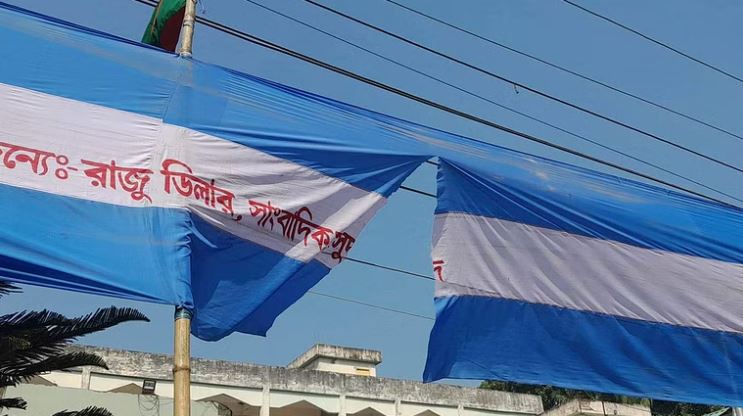 The football world cup is gathering in distant Qatar. Its craze has spread to Bangladesh as well. Argentina, the hot favorite of the World Cup, has huge fans across the country. One such group of Argentina supporters raised a 1,600 feet long flag in Jamalpur’s Sarishabari. But it was cut off in the dark of night due to hostility. Argentina supporters have submitted a written complaint to the police station.

According to the complaint, local youth Masudur Rahman pulled a flag from the BJMC Mosque in Sarishabari Municipal area to Dak Bungalow with the supporters of the Argentina team last Friday. The flag is 160 feet long. Saudi Arabia vs Argentina game was held on Tuesday afternoon in the football World Cup. Argentina lost 2-1 to Saudi Arabia in the game. As Argentina lost, Brazil fans took out a victory parade in the city in the evening. After the victory procession, in the darkness of the night, Brazilian supporters tore the Argentine flag in two places in front of Sonali Bank.

Masudur Rahman said, I spent 30 thousand rupees and made the flag of my favorite team, Argentina. I hung from BJMC Masjid Mor to Sonali Bank branch in the city. This morning, I came to see that in the dark of the night, some of the Brazilian fans had cut two parts of the flag.

He said, the flag has nothing to do with the game. Loved the Argentina team and planted the flag. The flag ripped and hurt my liver. I have made a written complaint to the police station in this regard. Request to the administration that those who tore the flag should be brought under the law.

Sarishabari Police Station OC Mohabbat Kabir confirmed the fact of receiving the complaint and said that necessary action will be taken after investigation.