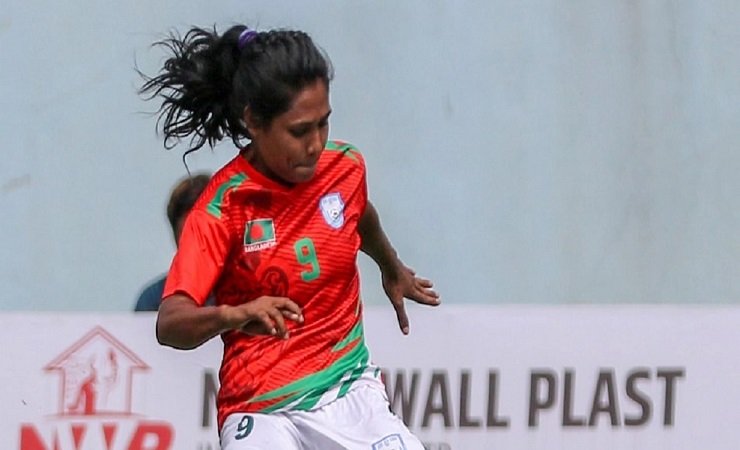 Bangladesh women’s football team has made the countrymen happy by conquering the Himalayas. After returning to the country, everything was fine from the airport to the open-top bus to the Buff office. Later there was a problem while opening their luggage. Two star footballers of the team, Shamsunnahar and Krishna Rani, stole several items including dollars from their luggage.

Krishna and Shamsunnahar said this incident happened after landing at Shahjalal International Airport in Harat on Wednesday afternoon from Nepal. Who did such a despicable act in a place like the airport? The question has arisen. Hazrat Shahjalal International Airport Authority has clearly stated that no incident of theft happened at the airport. So the question is where Krishna-Shamsunnahar’s dollars and money were stolen?

Bangladesh women’s team coach, Golam Rabbani Choton, said Krishna’s luggage was broken into and $900 and Tk 50,000 were taken. And Shamsunnahar’s luggage was deducted 400 US dollars. Apart from this, some valuable belongings of these two footballers have been lost.

Meanwhile, on Thursday morning Krishna Rani’s father Vasudev Sarkar told the media, ‘My daughter called me in the morning. He is very upset. Krishna told me that $900 was stolen from her luggage. And from Shamsunnahar’s luggage, some Nepalese coins and clothes were also lost.’

When the theft came to light, the investigation began. The airport authorities said after seeing the CCTV footage of Wednesday, there was no incident of theft. The statement signed by Kamrul Islam, executive director and group captain of the airport, stating that the CCTV footage of the airport was monitored and analyzed, said, “Buffe protocol representative and two team officials checked the tags: fully intact and locked, Biman took the luggage from the Bangladesh Airlines authority and arrived at the airport. left.’

This is not the end, if the stolen money is not found in the country, the Tribhuvan International Airport in Nepal will also be contacted, said Mahfuza Akhtar Kiran, Chairman of the Women’s Football Committee. He said, ‘If there is no evidence of dollar theft at Dhaka Shahjalal Airport, then we will contact Tribhuvan International Airport in Kathmandu, Nepal. I will request them to investigate whether the incident happened there or not.’

What if the stolen money is not found? Mahfuz Akhter Kiran, a member of the highest governing body of football, also gave a solution to this. He said, ‘They are little girls. This number is very big for them. So we are giving a lot of importance. And if this money is not available, the Bangladesh Football Federation (BAUFFE) will look into it. On behalf of the Football Federation, we will take steps to pay them the money.

Incidentally, in the first match of this year’s Women’s SAFF Championship, Bangladesh girls showed their superiority by defeating Maldives 3-0. In the second match, the Pakistan women’s team was blown away by a 6-0 margin. And the five-time champion beat India 3-0 to become the best in the group in the semi-finals. Sabinara played more fast-paced football in the match of four. Where the victory against Bhutan came with 8-0 goals. In the final, the students of Chotan Rabbani Chotan took the desired title by breaking the dreams of the girls of the Himalayan country.

Borja Iglesias: “We have to normalize work with psychologists”