Virat Kohli: Virat Kohli gave such a reaction after seeing his lookalike selling branded shoes and clothes on the road

Team India’s star batsman Virat Kohli has crores of fans all over the world. Taking advantage of Kohli’s popularity, a Virat Kohli lookalike from Puma started selling clothes and shoes of a famous brand on the streets of Mumbai. The special thing is that the face of that person is similar to Virat Kohli and he was wearing a jersey similar to that of the Indian team. Some people were even seen taking selfies with that person mistaking him for Virat Kohli.

Kohli shared a video on Instagram Story of a man who was selling Puma company shoes on Linking Road, Mumbai. Kohli wrote in the caption of the video, ‘Someone is copying me and selling Puma items on Linking Mumbai Road, will you take it into notice. Let us tell you that all this is part of the paid promotion done by the company. 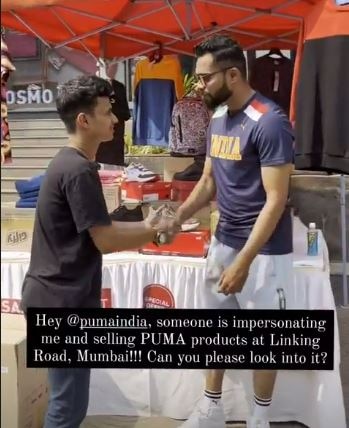 Virat Kohli is currently not a part of Team India on New Zealand tour and he is enjoying the break a lot. Virat Kohli recently visited Uttarakhand with his wife Anushka Sharma. There Virat and Anushka reached Kainchi Dham in Kumaon and took the blessings of Baba Neem Karauli Maharaj. Later, he also posed for pictures with the fans. Both Kohli and Anushka have a lot of faith in Baba Neem Karauli Maharaj.

Virat Kohli was last seen on the field during the T20 World Cup. In that tournament, the Indian team lost in the semi-finals itself. Although Virat Kohli was successful in showing a great game with the bat. Kohli was the highest run scorer in T20 World Cup 2022. Kohli scored 296 runs in six innings in this tournament at an average of 98.66 and a strike-rate of 136.40, including four half-centuries.

Virat Kohli holds the record for scoring the most runs in T20 Internationals. Kohli has so far scored 4008 runs in 115 T20 Internationals at an average of 52.73. During this, one century and 36 half-centuries came out of Kohli’s bat. Now Kohli will return to the field from the series against Bangladesh.