An exhibition match was played between Paris Saint Germain (PSG) and Riyadh XI on Thursday (January 19) in Riyadh, the capital of Saudi Arabia. In this match, Cristiano Ronaldo once again forced the fans to dance with his game. Cristiano Ronaldo, captaining Riyadh XI, scored two beautiful goals.

However, despite this strong performance of Ronaldo, Riyadh XI had to face defeat against PSG by 4-5. PSG’s team had players like Lionel Messi, Kylian Mbappe and Neymar Jr. Now the former captain of the Indian cricket team, Virat Kohli has praised Cristiano Ronaldo fiercely. Kohli has also slammed Ronaldo’s critics.

Kohli wrote in his Instagram story, ‘He is still doing at the highest level of 38. Football pundits criticize him for being in news every week and then easily cool down. He has performed like this against one of the top clubs in the world. While people were telling that he has finished. 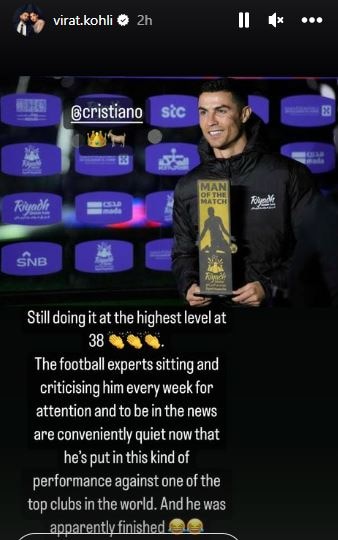 Through this match, Ronaldo and Messi probably came face to face on the football pitch for the last time. Let us tell you that Ronaldo has recently tied up with Al Nasser FC, which is an Asian club. Whereas Lionel Messi plays for PSG which is a French club. Ronaldo’s age has also increased in terms of football, in such a situation he can hardly play the next World Cup.

Talking about Virat Kohli, he is currently busy in the three-match ODI series against New Zealand. The Indian team has taken a 1-0 lead in the series by winning the first match. Now the second match is to be played at Shaheed Veer Narayan Singh Stadium in Raipur on January 21. Virat Kohli is showing great game in limited overs cricket.

King Kohli played centuries on two occasions in the three-match ODI series against Sri Lanka. Earlier, he also scored a century in the last ODI against Bangladesh. Kohli’s return to old form is a good sign for Team India. This year, India has to participate in events like the four-match Test series against Australia, Asia Cup and ODI World Cup.