UnaRed covers 48.62% of ATMs in the Dominican Republic

When going to a financial intermediation entity, users have to decide between the offers and services available to each of them. Although digitization has facilitated many of the transactions that motivated them to go to a bank branch, ATMs are still essential to convert what is in their accounts into liquid money, and it is one of the main aspects to consider when time to open an account.

However, not all financial institutions have the facilities to be able to bring this service to the entire national geography. In 2018, this motivated the Reserve banks (BanReservas) and BHD to unite the 721 and 715 cash dispensers they had at the time, respectively, under a single system that they called UnaRed. In four years, the network covers just over 1,600 machines throughout the country, which represents around 48.62% of the total number of ATMs in the Dominican Republic, which has 3,291 of these dispensers.

UnaRed provides services to five other banking entities in addition to BanReservas and BHD: Clients of the Popular Savings and Loan Association (APAP), Promérica, Banesco, BDI and recently Banco Caribe can withdraw money at any of these ATMs, without charge additional commissions for its use.

UnaRed ATMs can be identified by means of a visual distinctive with the logo of the brand, maintaining the screens and functionalities that have been arranged by each one of the banks in their respective machines. This represents greater savings for banks, as they do not have to replace all the devices that are part of the initiative.

Although their use is part of the daily life of all people who are banked, ATMs save time for users, by avoiding queues to request services that they can perform independently using these devices. This facility explains its expansion. A 2020 report from the Dominican Central Bank (BC) indicates that ATMs grew by 88% in the last 12 years, registering a total of 3,291 until that year. 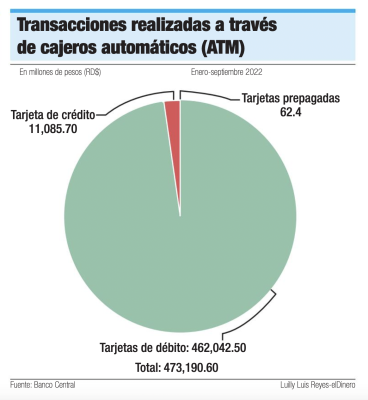 Far from being displaced by digital operations, cash continues to be in high demand, mobilizing thousands of users every day to carry out some type of transaction, whether for withdrawal or deposit. In January-September of this 2022, Dominicans made more than 85.8 million debit card transactions through ATMs, with a value of RD$462,042.5 million, according to BC data.

On the other hand, 3.06 million operations in these machines were carried out using a credit card, totaling RD$11,085.7 million, while 14,260 transactions were carried out with prepaid cards, adding RD$62.4 million to the total actions carried out by users through the vending machines. cash.

The total number of transactions between these three financial products was 88.2 million, with banking operations that represent RD$473,190.6 million mobilized through ATMs, according to the Central Bank report.

More than a trillion in assets

According to the Superintendence of Banks (SB), whose most recent data is from August 2022, the seven banking entities that are part of UnaRed have more than RD$1 trillion 696,000 million in assets, that is, 57.7% of the total assets managed by the Dominican financial system.

Of that amount, 84.6% is concentrated in the two multiple banks that started the network: BanReservas, with more than RD$1 billion, and Banco BHD, with RD$433.9 billion. For its part, Banco Caribe (RD$33,202 million), recently affiliated with the ATM channel, and BDI (RD$21,109 million), are the ones with the fewest assets, representing only 3.2% of the total number of financial intermediation institutions that they unified their network of ATMs, indicates the SB. 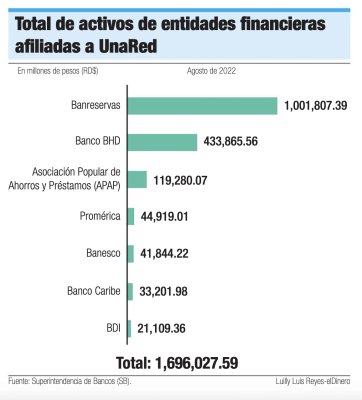 They celebrate the ninth edition of the BM Cargo Tournament

Central Bank: Year-on-year inflation maintains a downward trend towards convergence to the target range of 4% ± 1%

Anupamaa Shocking Twist: Vanraj, the father of three young children, will again become a father, a special track will be seen in Anupamaa