Umaran Malik IND vs NZ Mtech: The Indian team may have suffered a humiliating seven-wicket defeat in the first ODI against New Zealand in Auckland, but the match was memorable for fast bowler Umran Malik. Umran Malik has made his One Day International debut only through this match, where he showed a great game with the ball. Umran took two important wickets for 66 runs in 10 overs.

Umran bowled a ball at such a speed

The speed of 23-year-old Umran Malik was also seen in this match and he caught the speed of 140+ kmph from the very beginning. Umran bowled the second ball of the 16th over at a speed of 153.1 kmph. He had thrown this ball to Daryl Mitchell, on which this Kiwi player was successful in taking two runs. Just one ball earlier, Umran had Devon Conway walking. Later, Umran was also successful in taking the wicket of Daryl Mitchell. The result of Umran’s bowling was that the New Zealand team had lost three wickets for 88 runs at one time. 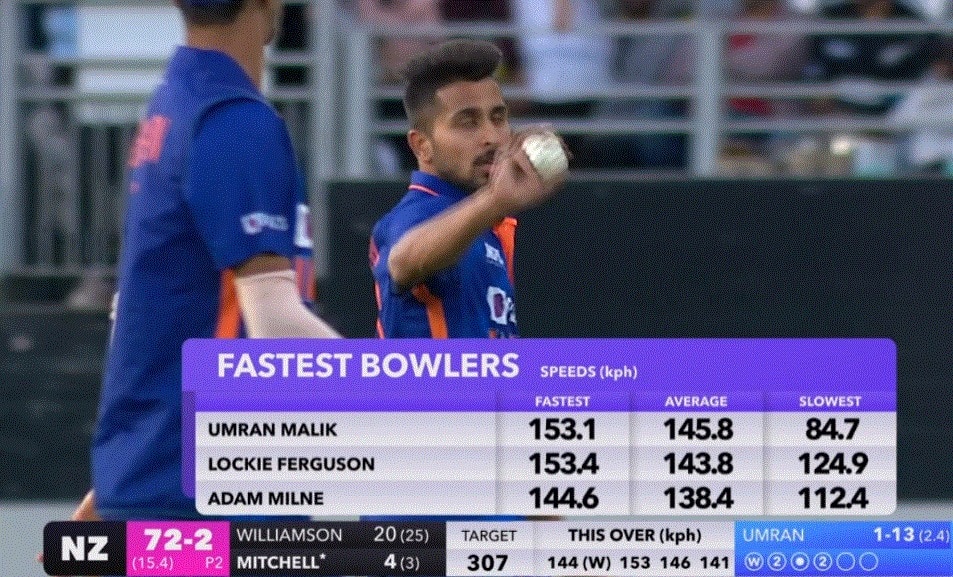 Umran made T20 debut against Ireland

In his first five overs, 23-year-old Umran Malik conceded just 19 runs and took two wickets. But Tom Latham smashed him in the sixth over, due to which his momentum deteriorated slightly in the later overs. Umran Malik made his debut for India in the T20 match against Ireland in Dublin earlier this year, where he was given the responsibility of bowling the final over. After this also played a T20 match in England and took the wicket of Jason Roy.

Umran has taken two wickets in three T20 matches and two wickets in one ODI. Apart from Umran, fast bowler Arshdeep Singh also made his debut against New Zealand. However, he could not succeed in performing anything special. Arshdeep Singh spent 68 runs in 8.1 overs and did not get any wicket.

That’s that from the 1st ODI.

Talking about the match, the Indian team scored 306 runs for seven wickets in 50 overs. Shreyas Iyer played the highest innings of 80 runs. While Shikhar Dhawan contributed 72 and Shubman Gill contributed 50 runs. In the last over, Washington Sundar, while thrashing the Kiwi bowlers fiercely, scored an unbeaten 37 off 16 balls which included three sixes and three fours. For New Zealand, Tim Southee and Lockie Ferguson took three wickets each.