Tourism is lagging behind in Barahona due to limited investment

Tourism is one of the main engines of the Dominican economy, since it contributes to the generation of jobs, foreign exchange, attracting foreign investment and the socioeconomic development of the impacted areas. This is stated by the executive director of the Barahona Tourism and Productive Cluster, Rafael Nazario. However, each province presents challenges.

“Development must go hand in hand with public policies and a strengthened capital capable of supplying the labor demand, these being the challenges that La Perla del Sur presents to establish itself as a tourist destination,” says the businessman.

The so-called “Pearl of the South” registers a population of 187,105 inhabitants, according to the National Statistics Office (ONE). For Nazario, the technical staff is essential to meet the needs of travelers as well as to consolidate a tourism industry in the southern province.

The executive regrets that the demarcation “has little job offer, since the population moves to already robust tourist areas where supply and demand is greater.”

The report “Opportunities for Dominican MSMEs in the tourism sector”, prepared by Asonahores, indicates that the demarcations of Barahona register 3,171 micro, small and medium-sized companies (MSMEs) dedicated to tourism. This is followed by Azua (3,233), San Juan (3,766), Bahoruco (1,279), Independencia (630), Pedernales (680) and Peravia (3,049).

The flow of foreign investment in tourism does not show a constant development, according to data from the Export and Investment Center of the Dominican Republic (ProDominicana). In 2015, these investments totaled US$671.9 million, in 2016, US$790 million, and in 2017, US$704 million. In 2018, this item stood at US$854.2 million, 21.3% more than the previous period.

Between January and July 2022, 18 tourism projects were approved with an investment of US$331.5 million, according to data from the Tourism Development Council (Confotur) distributed in La Altagracia (12), La Romana (3), Santo Domingo (2) and Samaná. (1).

Given this, the president of Asonahores, Rafael Blanco Tejeda, maintains that the Dominican Republic has positioned itself in a privileged way in the foreign market, however, the authorities are interested in improving the figures of foreign investments registered by the nation.

However, Barahona faces low investment, compared to other tourist regions, to establish itself as a tourist pole. For Nazario, investment is a strategic axis for the development of the travel and tourism industry.

The Ministry of Tourism (Mitur) indicated that the renovation of Los Patos and El Quemaíto beaches will have an investment of RD$83 million, while RD$45 million was allocated for the reconstruction of the access road to Saladilla beach.

“We have our eyes on the South, because where tourism arrives, development arrives and we believe in that tourism with a face that has a positive impact on the communities,” said the Minister of Tourism, David Collado.

The cluster executive stated that the province needs public policies that allow investors to decide on more economically depressed and vulnerable destinations. “A businessman needs economic security in an area to place his capital and make sure he has a return on investment,” he said. 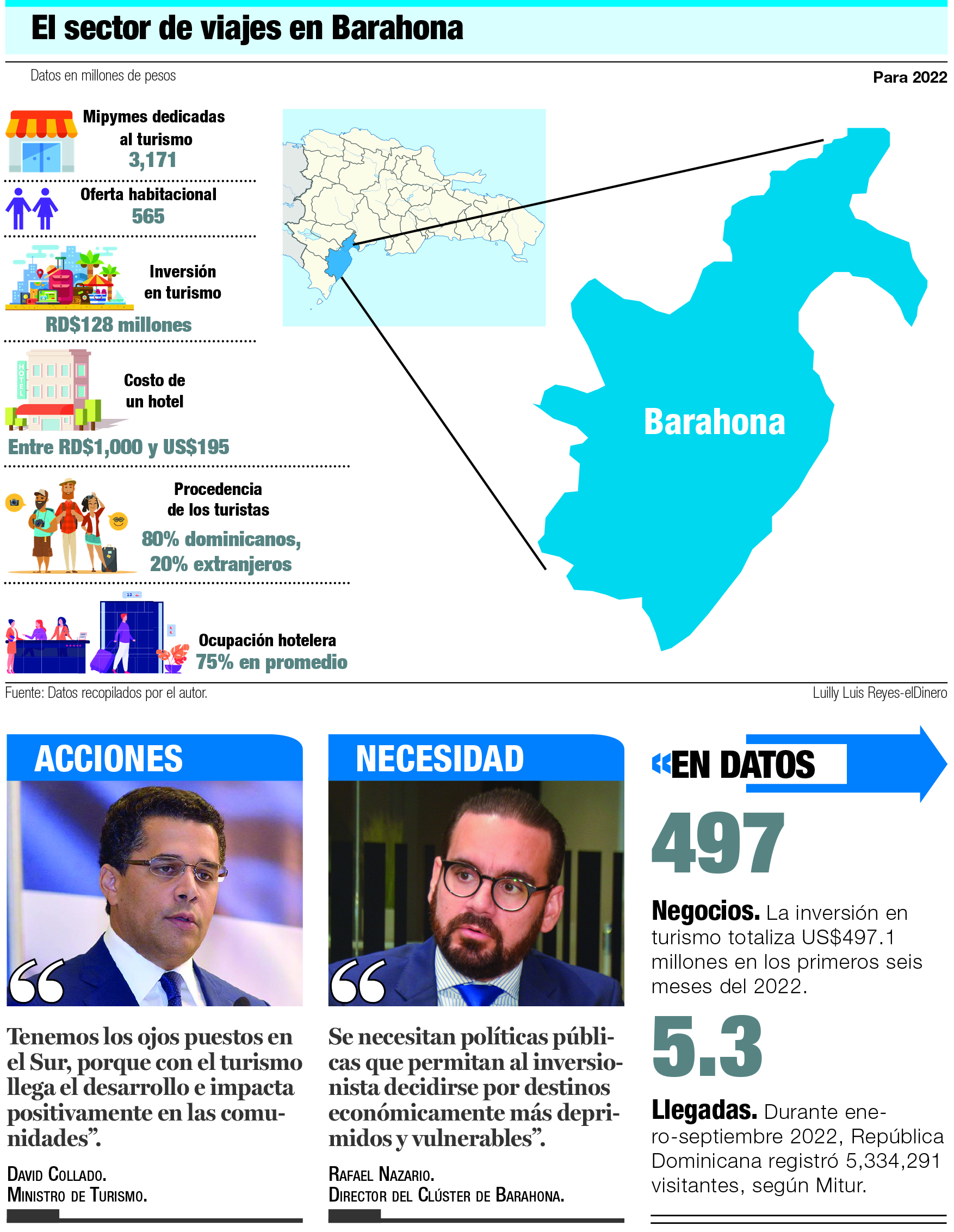 For Nazario, one of the failures in tourism development in the Dominican Republic is selling an all-inclusive offer. “People come to a place that is provided with everything and there is no economic spillover that is sustainable and does not reach the entire population,” he understands.

During April-June 2022, the BC indicates that the average expense of non-resident foreigners was US$140 for an average stay of seven nights. This is US$7.2 more than the same period in 2021, which recorded spending of US$132.8 but with a nine-night stay, and 1.4% more than 2019, which totaled US$138 with eight nights.

These data indicate that tourists are spending 5.4% more but staying overnight fewer nights between 2019 and 2022. For 2020, it stood at US$99.8 with a duration of eight nights.

Asonahores registers a housing offer of 565 in Barahona, this means 0.67% of the total amount (84,071) in 2021. Given this, Nazario clarifies that the demarcation has hotels for all tourist preferences, which vary between RD$1,000 and RD $5,000, in addition to offering luxury establishments that can cost over US$195.

It indicates that 80% of the tourists are from Quisqueya and 20% are made up of North Americans, Europeans and Japanese. It stands out that during holidays hotel occupancy reaches 100%, while on weekends it drops to 75% and during weekdays it is between 30% and 40%.

The Dominican Government has a special interest in the Southwest region, with Pedernales being the demarcation with the greatest development plan. Faced with this situation, the executive understands that Barahona will be integrated into the tourist offer of Pedernales as a complement.

“We are preparing the actors involved in the chain of tourism services in training and formation that will guide SMEs to expand their businesses and improve the quality of their services in the tourism area,” he explains.

This plan for the Enriquillo Region, made up of Barahona, Pedernales, Independencia and Bahoruco, will generate 1,500 direct jobs and 3,000 indirect ones, boosting the economy with an average of between US$120 million and US$150 million.

Given this development, Nazario assures that the natural attractions are waiting for tourists, however, they need investment for tourism to take off.

The Fed plans to slow rate hikes in December