The world saw the Messi-Ronaldo thrill in the Arab world 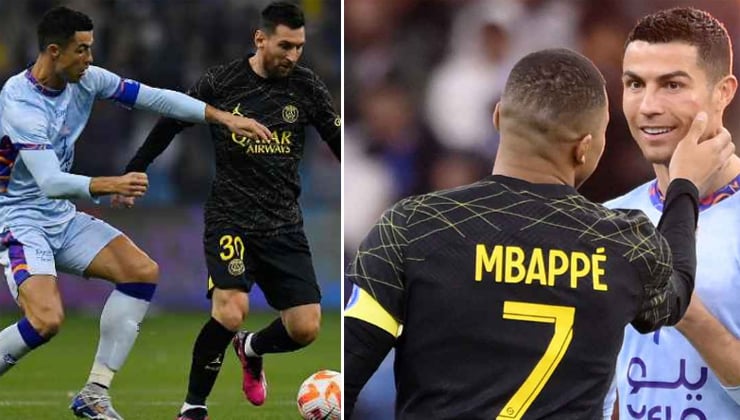 The friendly match is as it should be. Not a duel, the football world saw the thrilling match of Messi-Ronaldo in Arab Rajni. PSG won the exciting match of 9 goals. Cristiano Ronaldo’s star-studded French club, including Messi-Neymar and Mbappe, secured a 5-4 win over Arab Aqadas.

Ronaldo, the captain of All Star, became the man of the match by scoring two goals in the match. Messi-Mbappe scored in a thrilling match. However, if he had not missed the penalty, Neymar would have had a goal next to his name. Throughout the match, Messi-Ronaldo proved that there is no rivalry between them. Perhaps this will be the last time in the career of the two superstars to play head-to-head.

Lionel Messi scored at the beginning of the match. He gave PSG the lead through Neymar’s pass in the third minute of the match. Then in the 34th minute, Ronaldo equalized the team from the penalty.

However, the unexpected happened in the match after five minutes; Bernat left after seeing the red card and PSG became a ten-man team.

Captain Marquinhos led PSG again in the 43rd minute of the match. PSG were awarded a penalty in the second minute of added time in the first half. But Neymar could not use the opportunity. Shortly after that, Ronaldo equalized again by scoring another goal. The two teams went to the break of the first half with a 2-2 goal tie.

In the 53rd minute of the match, Mbappe’s extended ball scored Sergio Ramos. In the 56th minute, Argentina midfielder Gonzalo Martínez’s extension made Ronaldo equalized by Zhang Huan So. After four minutes, PSG got a penalty again. Mbappe scored this time.

When the match was 4-3, the unimaginable happened. Ronaldo, Messi, Neymar, Mbappe and Navas were picked up. Then the excitement in the field and gallery subsided. Mbappe’s substitute Ekiti made the scoreline 5-3 in the 78th minute. Taliska reduced the gap with a shot from distance in second-half added time. PSG won 5-4.

Meanwhile, the last time Messi and Ronaldo met was in December 2020 in the UEFA Champions League group stage match. Ronaldo scored a brace for Juventus in a 3-0 win over Messi’s Barcelona. This time again this 37-year-old superstar scored two goals. However, 35-year-old Messi smiled in victory.