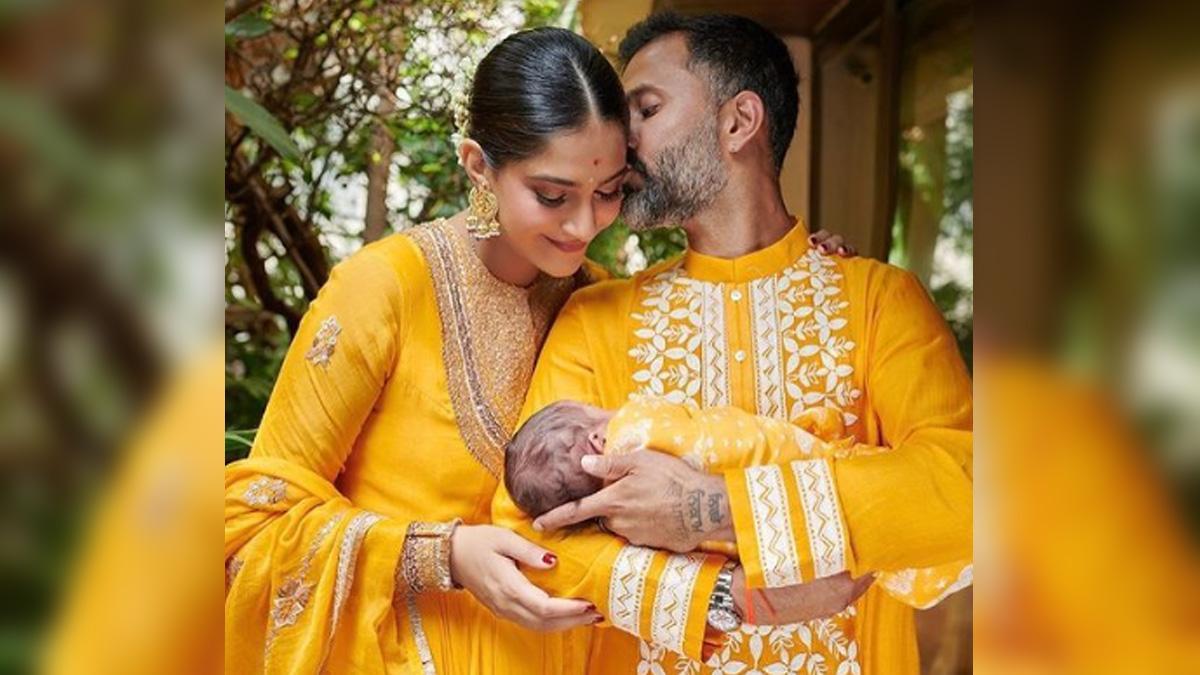 Sonam Kapoor welcomed her son on 20 August. While enjoying the motherhood period, Sonam Kapoor also shared some posts on Instagram, but none of them mentioned her son’s name. Now the actress has announced the name of the son. Along with this, he has also shared a lovely photo, in which Anand Ahuja is seen kissing Sonam Kapoor. The son is Vayu in his lap.

Sonam shared the meaning of the name
This post of Sonam Kapoor is creating panic on social media. The actress has named her son Vayu Kapoor Ahuja. Along with this, Sonam Kapoor has also given the full meaning of Vayu in the caption. The caption that Sonam Kapoor has written with the photo has brought new meaning to our lives. In the spirit of Hanuman and Bhima, the kind of courage and strength they have given us. Whatever is sacred, life-giving and belongs to us, we bless our son in this spirit, whom we all together have named Vayu Kapoor Ahuja.

Talking about the detailing of the outfits worn by Sonam Kapoor and Anand Ahuja in the photo, the actress is wearing a dark yellow color Anarkali suit, which has a closed neck. Heavy golden work has been done on the arm and neck. The zari work has also been done on the matching dupatta. There is a slight cut on the edge. The hair is tied in the form of a bun. Wearing heavy earrings in the ears. Completed the look with a golden colored bindi and red nail paint. At the same time, Anand Ahuja is wearing kurta pajama with white thread work. Vayu Kapoor is carrying Ahuja in her lap, who is carried in a yellow muslin cotton cloth.

As soon as Sonam Kapoor posted this photo and told the fans that she has named her son Vayu Kapoor Ahuja, fans started congratulating her in the comments section. Meanwhile, Sonam Kapoor’s father and actor Anil Kapoor also reacted and made a lot of red heart emoji and smiling emoji. All the celebs of the industry are congratulating Vayu and his family. Also expressing happiness on being a part of the family.

Sonam gave good news to the fans
When Sonam Kapoor had given the good news of the son’s arrival to the fans, she wrote in the post that now our priority will change. The child will obviously be just their responsibility. The truth is that children do not come into this world of their own accord. We bring them into this world of our own free will. So this is a very selfish decision. We all behave selfishly.

Talking about Sonam Kapoor’s workfront, the actress has been away from the big screen for a long time. She was living in London with Anand. She came to India for delivery. Sonam and Anand Ahuja launched their own brand while staying in the pregnancy phase, in which Sonam was seen flaunting baby bump. Fans had showered a lot of love on him. The photos also became very viral. Sonam Kapoor also gave fashion goals in the pregnancy phase.