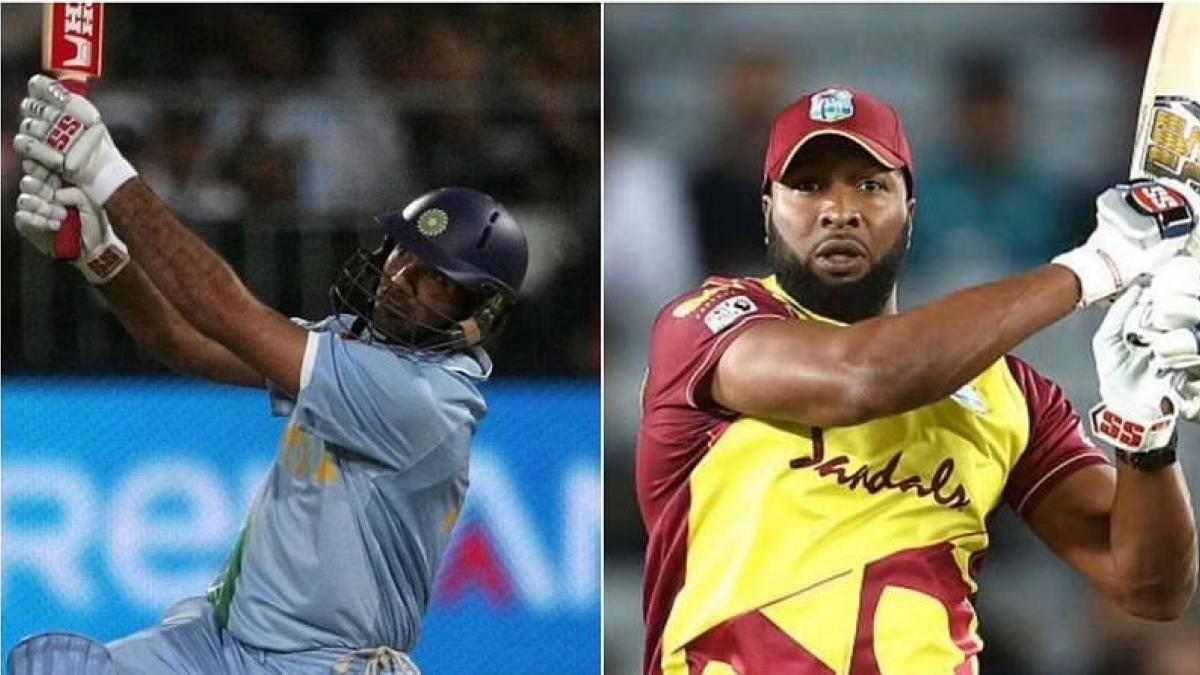 Six Sixes in Over: Not only Yuvraj Singh… these players also hit 6 sixes in 1 over, see full list

The thrill of hitting sixes in cricket always speaks loudly and if a batsman hits six sixes in six balls, then what to say. In the 2007 T20 World Cup, Indian team batsman Yuvraj Singh hit six sixes in an over against England on this day (September 19). Even though 15 years have passed since that memorable incident, Indian fans can never forget this moment. Let us know about the batsmen who have hit six consecutive sixes in recognized 20 overs, 50 overs or first class cricket.

1.Gary Sobers (First Class Cricket): 49 years ago, Sir Gary Sobers did this feat for the first time. On 31 August 1968, Sir Gary Sobers’ name was associated with an amazing feat. Playing for Nottinghamshire in the English county, he hit 6 sixes in all 6 balls of Malcolm Nash’s over of Glamorgan.

2. Ravi Shastri (First Class Cricket): After 17 years, on 10 August 1985, Ravi Shastri equaled Sir Gary. When he hit sixes in all the balls of the over off Tilak Raj in the Ranji match against Baroda.

3. Herschelle Gibbs (ODI International): South African stalwart Herschelle Gibbs became the first batsman to hit 6 sixes in an over in One Day Internationals. He did this feat on 16 March in the 2007 World Cup match. In St Kitts, he then sent all six balls of the over of Dan van Bunge of the Netherlands off the field.

4. Yuvraj Singh (T20 International): Yuvraj Singh, one of the dangerous batsmen in the cricket world, became the fourth batsman to do so. While became the second batsman of international cricket. On 19 September 2007, Yuvraj targeted Stuart Broad in the T20 World Cup match against England. Just before that in the match, Andrew Flintoff had made lewd gestures towards Yuvraj, to which he responded by hitting sixes.

5. Jordan Clark (2nd XI match): Lancashire all-rounder Jordan Clarke became the fifth professional cricketer to achieve this feat. On 24 April 2013, he made his victim in the second XI match against Yorkshire by Gurman Randhawa’s balls.

6. Alex Hales (NatWest T20 Blast): Playing for Nottinghamshire, Alex Hales hit six consecutive sixes in a different style on 15 May 2015. In the NatWest T20 Blast tournament, after hitting a six on the fourth ball of Boyd Rankin’s 11th over, Hales also hit sixes in the last two balls. On getting the strike again on the second ball of the next over, he again hit 3 sixes in a row. Along with this, it took him two overs to hit six consecutive sixes.

8. Misbah-ul-Haq (Hong Kong T20 Blitz: Misbah-ul-Haq hit six consecutive balls in the T20 league held in Hong Kong in the year 2017. But his sixes came in the 19th and 20th overs of the innings.

10. Ravindra Jadeja (Inter District T20 Tournament): Ravindra Jadeja had hit 6 consecutive sixes in 1 over in Saurashtra Cricket Association’s Inter-District T20 tournament in 2017. Jadeja did this charisma in the over of off-spin bowler Neelam Vamja.

12. Ollie Davis (Under 19): Kangaroo batsman Ollie Davis hit six sixes in the over during the record-breaking double century in the Under-19 Men’s National Championship organized by Cricket Australia at the Adelaide ground in 2018.

15 Thisara Perera (List-A cricket): Sri Lankan all-rounder Perera hit six sixes against Bloomfield Cricket and Athletic Club while playing for Army Sports CC in the year 2021. Perera reached the half-century figure in 13 balls in that match, which was the second fastest half-century in List A cricket. Perera is the first Sri Lankan player to hit six sixes in an over in professional cricket.

Given the possible impact of Fiona, Refidomsa has reserves to supply the Dominican market

Virat Kohli IND vs AUS: Virat Kohli’s bat runs a lot in Mohali, 6 years ago the Australian team was blown away