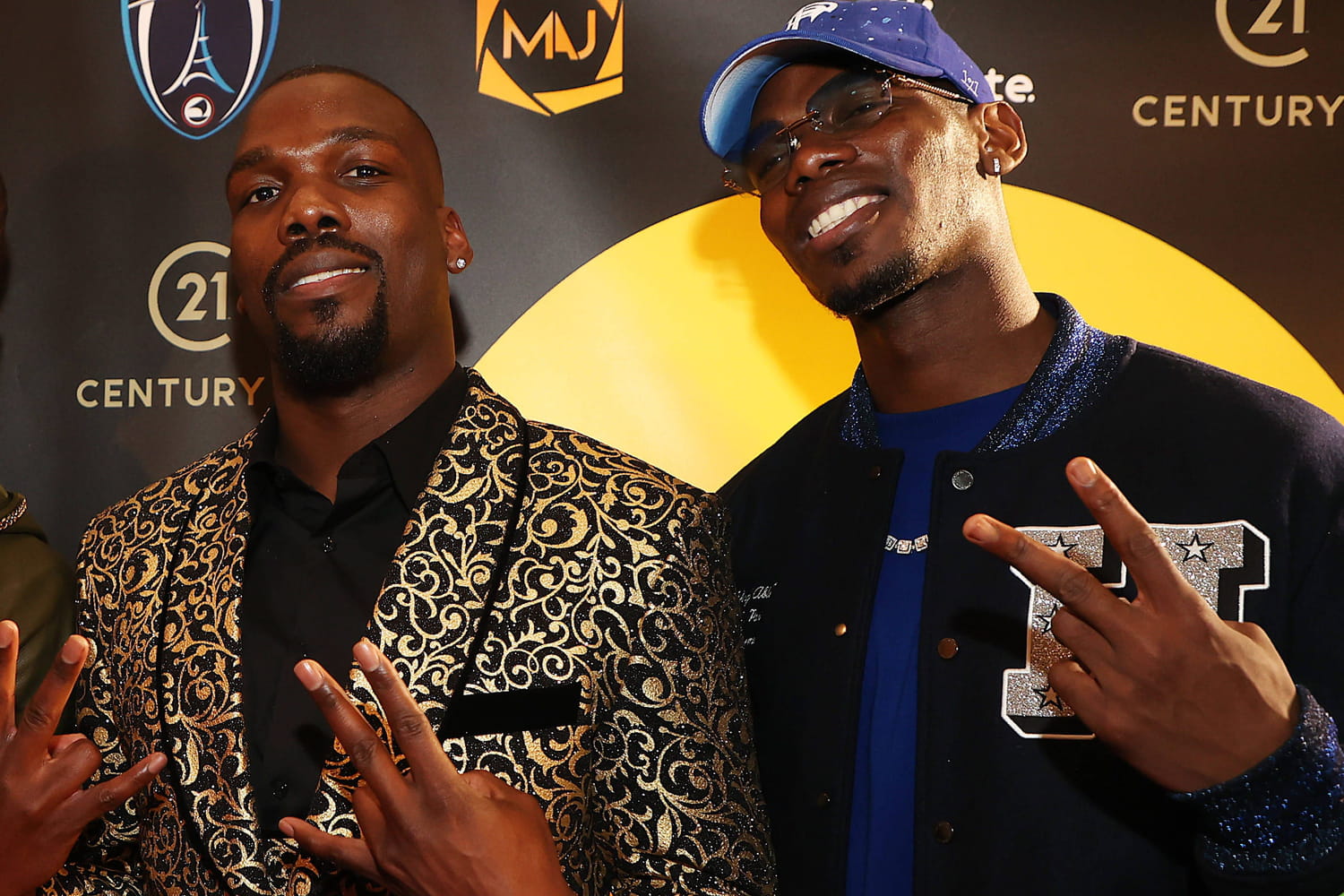 Paul Pogba case: details on the role of his brother Mathias

The Paul Pogba affair took a new turn this Thursday, after several weeks of scandals around the star of the Blues and Juventus of Turin, who denounced this summer attempts at extortion from his relatives and in particular from his brother Mathias Pogba. Tuesday, a first suspect was placed in police custody in this case which shakes the middle of French football. On Wednesday, three other people suffered the same fate, said the judicial source, confirming information from Le Monde. One of them was preparing to leave the country according to information from France Info. Among these people, a man in his forties would also have a very long criminal record and has already been in prison for an attempted homicide.

One of the men taken into custody is suspected of having asked Paul Pogba to follow him to the apartment where the footballer claims to have been sequestered. He is also suspected of having demanded a deposit of three million euros out of the 13 million required but also of having brought in two hooded men armed with assault rifles, still according to France Info. At present, all those involved deny the facts and are presumed innocent.

But it is still and always Mathias Pogba who focuses attention after this new twist in the case. The brother of Paul Pogba, who is part of the custody, for his part presented himself “at the beginning of the afternoon (Wednesday) to the investigation service” where he had been summoned, indicated AFP citing “a close source”. On Thursday evening, The Parisian, revealed several elements of his police custody, in particular that Mathias Pogba would have confirmed to have “took the initiative to shoot the video implicating his brother Paul” and that he would have played an active role in the blackmail attempt. He is indeed “suspected of having helped the blackmailers to locate the world champion footballer”. The investigators would have acquired the conviction that Mathias Pogba was the “link with the four other suspects”, being “the only one among them to know the schedule of his brother Paul and their mother, Yeo Moriba”, she also threatened.

The Pogba case started with a complaint filed on July 16, 2022 with the Turin public prosecutor’s office by Paul Pogba, in which he denounced extortion attempts between March and July 2022 amounting to several million euros. But it really exploded on Saturday August 27, when Mathias Pogba, 32, posted a series of intriguing messages on social media. Paul Pogba’s older brother then promised “big revelations” about his younger brother, 29, putting the football world in feverish expectation. In this video broadcast in four languages ​​(French, Italian, English and Spanish), Mathias Pogba, himself a professional footballer, announced that “the whole world”, like Juventus Turin, the Italian club where his brother returned this summer after a first stint between 2012 and 2016, and six seasons at Manchester United, “deserve to know certain things in order to decide in full knowledge of the facts whether he (Paul Pogba) really deserves admiration, respect, his place in the team of France, if he is a trustworthy person”. “All of this risks being explosive,” he concluded, without further details.

Sunday August 28, Paul Pogba counter-attacked via a statement signed by his lawyers and his agent, Rafaela Pimenta, who has just taken over the company of Mino Raiola, the recently deceased star agent. “Mathias Pogba’s recent statements on social media unfortunately come as no surprise. They come on top of threats and organized gang extortion attempts against Paul Pogba,” the statement said. “The competent authorities in Italy and France were seized a month ago and there will be no further comments on the ongoing investigation”, continued the representatives of Paul Pogba in this press release.

3- Details of the alleged extortion case

According to the first revelations of France Info at the end of August, Paul Pogba confided during the hearings to the investigators of the Central Office for the Fight against Organized Crime that he would have “in particular been trapped by childhood friends and two hooded men armed with assault rifles” in March 2022, when he was going to visit his family in Lagny-sur-Marne (Seine-et-Marne), on the sidelines of a gathering of the Blues. According to sports columnist Daniel Riolo, who spoke onon BFMTVPaul Pogba was even briefly kidnapped on this occasion, while France news indicates that he was “trained in an apartment in Paris”.

Paul Pogba’s attackers would have claimed 13 million euros for “service rendered”, claiming to have protected him discreetly for 13 years and accusing him of not having helped them financially since he became a professional player. The player would have paid 100,000. Paul Pogba then claimed to have recognized his older brother Mathias among the suspects.

Paul Pogba, who is currently sidelined with a right knee injury, assured investigators he has also been bullied several times in Manchester and up to Juventus’ training centre.

In this case, the name of the French football star Kylian Mbappe also appears, without his knowledge: Paul Pogba explained to the investigators that “his blackmailers wanted to discredit him by broadcasting a video in which he allegedly asked a marabout from his family circle to cast a spell” on the PSG striker, this that the player denies. A video on a USB key was notably mentioned in the press without any image having been revealed at this stage.

Mathias Pogba, prolix on social networks, has several times fueled the rumor. “Kylian, now do you understand? I have nothing negative against you, my words are for your good, everything is true and proven, the marabout is known! Sorry about this brother, a so-called Muslim thoroughly in witchcraft , it’s never good to have a hypocrite and a traitor near you!”, he notably wrote on Twitter at the end of August.

In early September, Kylian Mbappé said at a press conference that he was able to speak directly with Paul Pogba assuring that the case would not affect their relations. “I prefer to trust the word of a team-mate. He called me, he gave me his side of the story and today it’s his word against his brother’s word, so I’m going to trust my teammate in the interest of the selection,” said the PSG star.

Between the end of August and the beginning of September, Mathias Pogba multiplied the interventions on social networks, maintaining his accusations against his brother, still without formulating them explicitly: “I hope that you will not be fooled by an attempt manipulation of the media and the authorities. When you are famous, the world is with you, the authorities listen more attentively. But that does not put you above justice, the police are not your minions! he writes at the end of August on Twitter.

Since then, Mathias Pogba, through the voice of his lawyer, said he was “totally foreign to any extortion maneuver against his brother, Paul Pogba”. “It is clear that the difficulties experienced by the Pogba family are the result of external threats which justice, now seized, will take the measure”, wrote in a press release Me Richard Arbib. “Mathias Pogba, who aspires more than anything to calm the situation with his brother, will now reserve his word for the investigating judges in charge of this case, if necessary,” he also said.

According to information from RMC Sport, Paul Pogba has already paid 100,000 euros to individuals who threatened him in a Parisian apartment. Childhood friends as well as the big brother of the French international would have claimed 13 million euros in total from him. A sum to be given “to those who have protected him for years”, and “ensured his safety”, believe the extortionists, according to what Paul Pogba would have explained to the investigators. According to several media, the French would have liked to pay the full amount claimed, but his bank would have limited his withdrawal, forcing him to make a commitment in writing to his attackers.

7- The testimony of Paul Pogba’s mother

Paul Pogba’s mother, according to information from RMC Sport on August 30, was questioned by investigators as a witness after the opening of the investigation. For the moment, nothing has filtered on the words of the latter in the face of the tearing of her sons.

8- A new load from his brother

On the night of Tuesday August 30 to Wednesday August 31, Mathias Pogba released new video content, once again charging and accusing his brother. This is because of my brother, who, because of money and fame, lost track of reality a long time ago. People talk about settling things in the family, but if this brother does not want to talk and persists in destroying the family, what choice is there?” Also, adds Mathias Pogba, in his relentlessness to discredit all those who know his little secrets, Paul claims that the money he gave to his childhood friends was extorted, easy for the media to say, but what do we do if this money is justified by official and registered documents, and that ‘there’s evidence of a consensual gesture!? It’s not the same, is it?’

9- Yeo Moriba, leader of the gang?

According to RMC Sport, the mother of Paul and Mathias Pogba was also heard by the investigators and testified on the case. Yeo Moriba was heard by investigators as a witness after the opening of a preliminary investigation on August 3 of the leader of organized gang extortion and attempt. Asked by Le Figaro, the president of Tours FC Jean-Marc Ettori does not say he is surprised at all and questions the role of the mother, “leader of the gang”. “The mother of Paul, Mathias and Florentin (the third brother, twin of Mathias), Yeo Moriba, is “the gang leader, the one who pilots everything, the one who says yes, the one who says no”. At the time, Mathias Pogba had been proposed to the club. After a first refusal, a counter proposal had been sent by the clan. “We were told to take Mathias and Paul will pay his salary, his expenses. And in addition he offers you to come and play a (friendly) match in Tours, and he will come twice to see his brother play in Tours.” The sum due to the club – a total of 80,000 euros – has never been paid. “We never had the money” he explains to our colleagues.

In addition to the complaint filed on July 16, 2022 with the Turin public prosecutor’s office, an investigation was entrusted to the services of the Central Directorate of the Judicial Police (DCPJ) and a judicial investigation opened in France on September 2, in Paris, for in particular “extortion with a weapon, kidnapping or sequestration in an organized gang and participation in a criminal association”.