Offside sword, Argentina’s 1 goal against Saudi Arabia in the first half 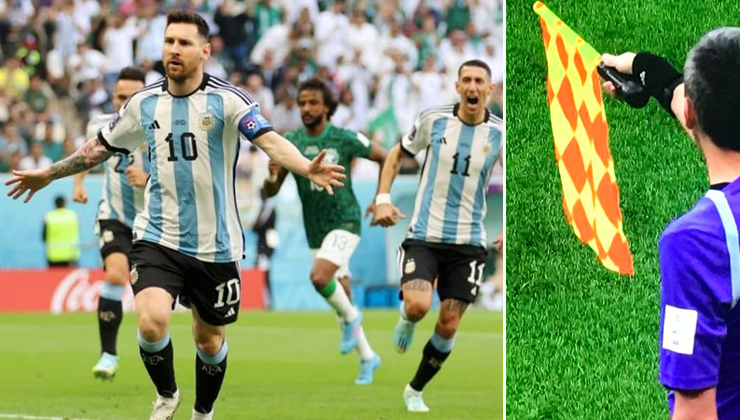 Argentina started their Qatar World Cup mission with a match against Saudi Arabia. The two teams will take to the field at Lucille Iconic Stadium on Tuesday at 4 pm Bangladesh time.

Albiceleste scored 1 goal in the first half of the match. At the beginning of the match Scaloni’s disciples started aggressively. After 2 minutes, Messi attacked the dare of Messi’s opponent. However, Saudi survived this journey. However, Saudi Arabia lost Khei in the 9th minute of the match. The match referee blows the penalty whistle on the decision of the Video Assistant Referee (VAR). Messi’s great penalty kick leads Akashi-Sadara 1-0.

Argentina hit the Saudi camp again in the 22nd minute of the match. However, the goal was disallowed due to offside. However, Albiceleste did not have to wait long to see the goal. In the 27th minute, Argentinian star Martinez scored a right foot kick in the D box. But the VAR decision brings bad news. Argentina fell into the trap of offside again. This goal was also canceled. Scaloni’s men missed another chance in the 35th minute of the match. Offside is like sand in the eyes of Di Maria, Martinez and Messi. The first half ended 1-0.

Meanwhile, Messi-Martinez dominated the field from the beginning of the match. Messi was in possession of the ball for 62 percent of the match. Apart from that, Sada-Akashira took 3 great shots. Offside Messi suffered 7 offsides in the match. 4 file decisions came in the first half. On the other hand, Saudi was in possession of the ball for 43% of the time in the match. They could not take any big shot in the Argentine camp. However, one save and 7 fouls were decided in their camp.

Meanwhile, in today’s match, Argentina entered the field with 4-2-3-1 and Saudi Arabia 4-4-1-1 formation. This is the first match between the two teams in Group C.

In today’s match, Lionel Scaloni’s disciples have entered the field with a full strength team. In this match, Messira faced Saudi in Lusail field with the title of favorite.