Neymar is no longer playing in the group stage 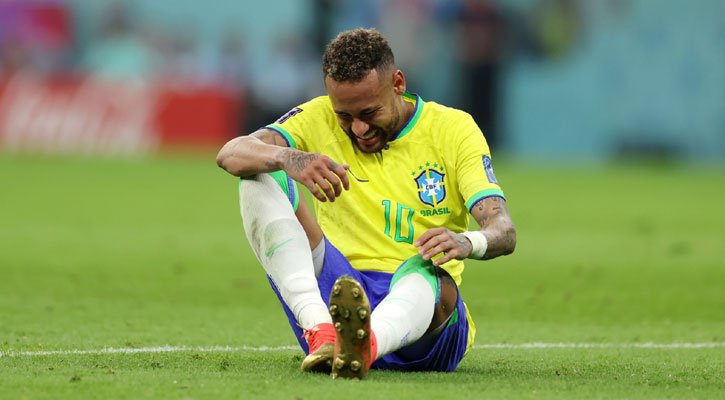 Sports Update Desk: Despite getting a great victory in their first match in the World Cup against Serbia, Brazil is not relieved. Neymar’s injury has worried the team that started the World Cup with Richarlison’s double.

The Brazilian star left the field in the 80th minute of the match due to an ankle injury. Neymar is also seen crying while sitting on the bench. Photos released later showed the area around Neymar’s ankle badly swollen.

Despite the fears of the fans, the Brazil coach assured Tite that Neymar will be able to play in the next matches. However, the Brazilian press “Globo” has confirmed that Brazil’s heroes cannot enter the field in the group stage. Spanish daily Marca reported the same. As a result, he is not playing against Switzerland and Cameroon.

Neymar was injured in the 67th minute of the match against Serbia. Neymar sprained his right ankle in a hard tackle by Serbian fullback Milenkovic. After 13 minutes, Brazil coach Tite picked up the PSG star. Neymar is seen walking on his way back to the dressing room.

Brazil team doctor Rodrigo Lasmar told the media after the match, ‘Immediately we started treatment on the bench. The situation will be assessed in 24 to 48 hours. Tomorrow (today) will see the injury situation again. we are waiting

Brazil coach Tite gave hope and said, ‘You can be sure that he will play in the World Cup. However, the Brazilian media Globo said that it may take a long time for Neymar to recover from the injury. Recovery time will be determined after determining the severity of the injury. Later, Globo reported that Neymar will not be able to play in the knockout stage matches.

On Friday (November 25), Brazil’s team doctor told Reuters, “Neymar underwent an MRI on Friday afternoon. The ankle was severely injured. And so definitely cannot play in the next match. Neymar will undergo treatment and efforts will be made to get him ready to play again at the World Cup.’