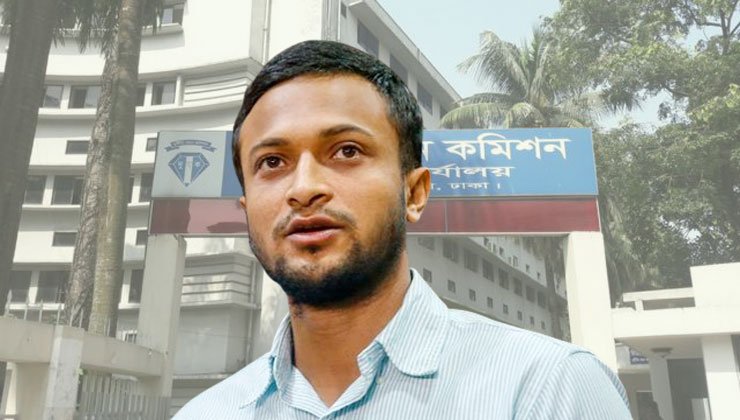 Named in corruption, yet Shakib Al Hasan is retained as the ambassador of ACC

The name of the world’s best all-rounder cricketer Shakib Al Hasan is involved in a major corruption. He is involved in contracts with gambling-based organizations and stock market manipulation. However, Shakib remains as the goodwill ambassador of the Anti-Corruption Commission (ACC). The anti-corruption agency of the state has not canceled the contract with him yet.

There are many whispers about this in various quarters. Many say that the ACC is supposed to investigate the irregularities and corruption of Shakib Al Hasan, but instead, this cricketer continues to work as a special envoy of the organization. In such a situation, the anti-corruption commission is embarrassed about Shakib.

In 2018, Shakib Al Hasan, the biggest advertisement of Bangladeshi cricket, was signed as the goodwill ambassador of ACC. The globally respected cricketer also did a few free advertisements for ACC. In that advertisement he gave the message to make the country free from corruption. He also said that if someone commits corruption, that information should be reported to the ACC.

But now that Shakib Al Hasan’s name is involved in the big corruption. Despite talking about making the country corruption-free, Shakib himself made a deal with a gambling-based organization. On August 2, he also published that on Facebook. But gambling and any agreement related to it is illegal under the law of Bangladesh. Later, the left-handed all-rounder canceled the contract amid many controversies.

Shakib Al Hasan was accused of share manipulation before the controversy subsided. According to Bangladesh Securities Exchange Commission report, a ring has made a profit of Tk 137 crore by manipulating the shares of seven companies listed in the capital market. One of the members of that circle is Shakib Al Hasan.

Not only that, the world’s best cricketer is involved in various financial activities like gold trading on a large scale. Some of these are involved in controversial ways. Despite all this, how can he remain as a goodwill ambassador of a state institution like the Anti-Corruption Commission, there are many questions.

ACC director Naseem Anwar was looking after the matters related to goodwill ambassador along with Shakib Al Hasan. He is currently retired. Regarding the cancellation of the contract with Shakib, this former ACC official told Dhaka Times, “If you want to cancel the contract, Shakib and ACC should first inform each other.”

Nasim Anwar said about the terms and timing of the agreement, ‘There was no time limit for this agreement. It was that either party could cancel the contract with three months’ notice. Both sides had this freedom.’

Talking to Dhaka Times about this, the executive director of TIB. Iftekharuzzaman thinks, ‘Shakib has lost the ability to be an ambassador of ACC. Shakib’s name is associated with stock market manipulation. Although the allegation is not yet proven, the point is striking. So I think the existing agreement should be suspended. If the allegations are proved, both should refrain from such agreements.’

Meanwhile, no one in charge of the ACC refused to speak to the media in the Shakib case. However, two senior officials, who did not wish to be named, told Dhaka Times, ‘They are embarrassed by such controversial activities of Shakib Al Hasan.

Ind Vs Aus: Opening, Finisher… Before the World Cup, the questions that Team India would like to answer in the Australia series

Given the possible impact of Fiona, Refidomsa has reserves to supply the Dominican market