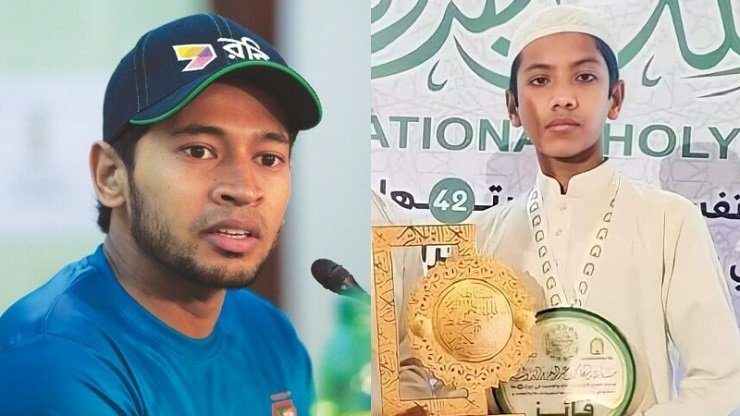 ‘Mr Dependable’ expressed his pride on his Facebook page. Mushfiqur Rahim wrote in his status, ‘Masha Allah, Alhamdulillah. Proud of you little brother. Please pray for us.’

Incidentally, 153 people from 111 countries of the world participated in the 42nd edition of the Hafez Badshah Abdul Aziz International Hafezul Quran Competition. Bangladesh’s Takrim won the third place there. He was awarded one lakh riyals (about 2.7 lakh taka) and an honorary crest.

Hafez Saleh Ahmad Takrim is a student of Markazu Faizil Quran Al Islami, Dhaka Madrasah in the capital. His house is in Bhadra village of Nagarpur upazila of Tangail. Father Hafeez Abdur Rahman is a madrasa teacher and mother is a housewife.

In addition, he won the first place in the selection test held under the supervision of the International Kirat Organization Bangladesh on May 22 and was selected as the sole representative of Bangladesh in the 10th International Hifzul Quran Competition held in the port city of Benghazi, Libya.

Earlier, Takreem won the first place in the world in the 38th International Hifzul Quran Competition held at Andishah (Al-Fikir) Auditorium in Tehran and raised the red-green flag of Bangladesh to the world court. Saleh won the Hefjul Quran competition organized by the private television channel Banglavision in the holy month of Ramadan 2020.

Apart from Takreem, several students of Markazu Faizil Quran Al Islami Madrasah were selected to represent Bangladesh for the International Hifzul Quran Competition in Kuwait, Egypt and Algeria but could not participate due to Corona.

Euromotors brings the Renault Express Van to the DR