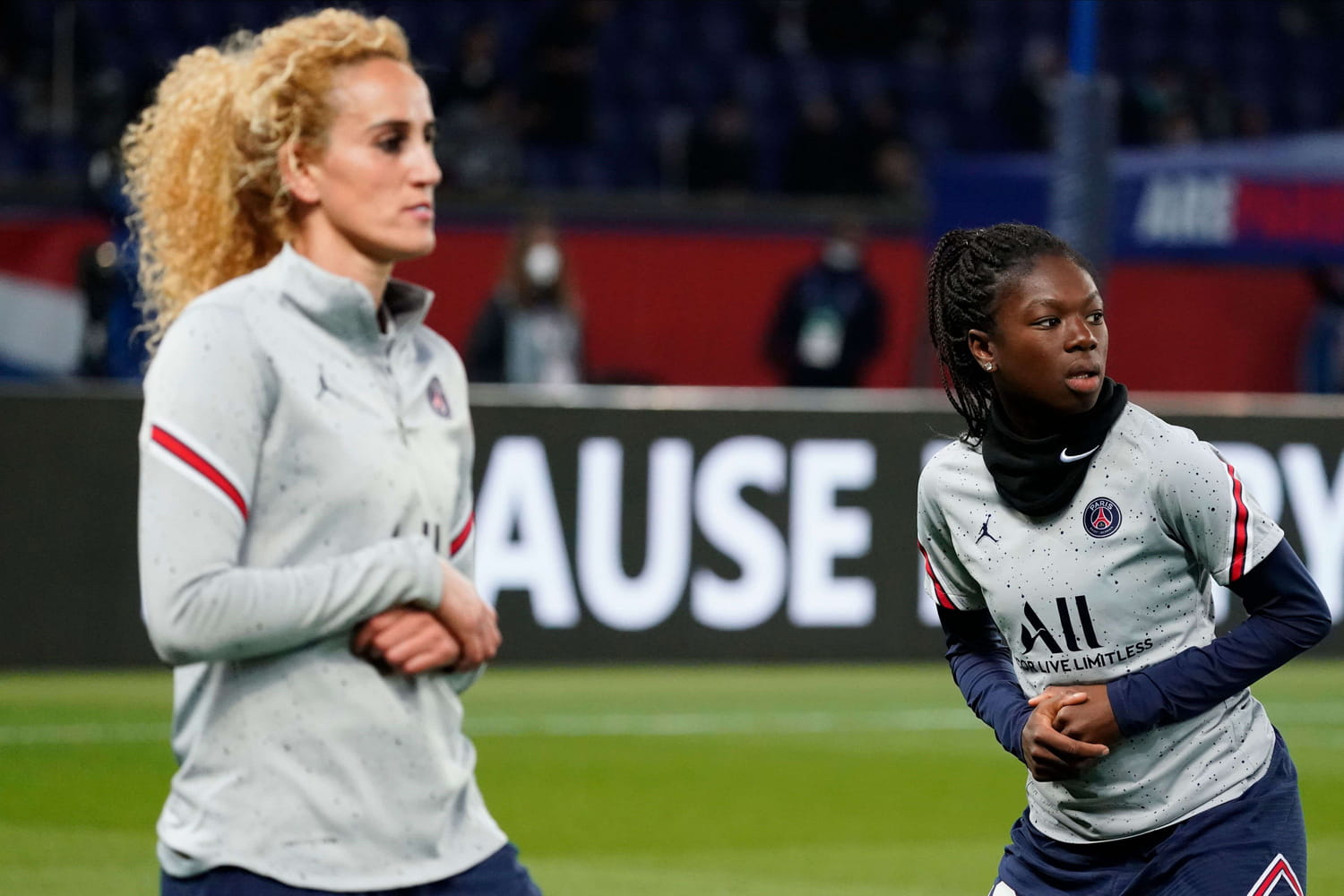 In a long article published this Monday, September 19, the Parisian unveiled the details of the “sponsored” attack by obtaining the investigation report tracing the origin of the conflict. “It has thus been irrefutably proven that Aminata Diallo nourished a real hatred against her club partner whom she considered an obstacle to her own sports career” indicate the investigators of the BRB in their report.

In this report, we discover that the investigators tapped the apartment and the telephone of Amina Diallo, also recovering old messages showing the deep hatred and jealousy of the player. A violent plan that one of his relatives, nicknamed “Jaja”, would be able to carry out against Kheira Hamraoui is also highlighted in this report. “If I was bad, jealous and calculating like her… I tell her destroy ithe destroys it.

The investigation report also reveals the tensions within the club with inappropriate remarks towards the leaders of PSG. “I’m going to be ruthless now! I need no one but to fuck my job for free I don’t accept… I wish them all well, I only need my loved ones.” “I should have made it cut off his legs,” she also said of a dispute that pitted her against an ex-PSG coach.

In addition, while the investigation continues, this report also highlights Google searches, very strange from the middle of the PSG as “breaking a kneecap” and “cocktail of dangerous drugs”. To find the attackers, the investigators will to look into the Snapchat application, after noticing that no phone calls were made during this evening.As Le Parisien explains, on a listening, Aminata Diallo seems to be worried about the possibilities of localization offered by the network social: “Yesterday I looked on Snap, everyone can see your position, they can know where you were there (…) It’s abused (…) I don’t care because I have nothing to hide.” By retrieving the data via the network, the investigators discovered that, that evening, three lines left Val-de-Marne at the same time. After recovering a telephone from the seals of one of the men, involved in drug trafficking, the investigators discover that he had entered the address e “56 rue des Cormiers, Chatou” in the Waze guidance application on November 4, 2021, right when Diallo, Hamraoui and Karchaoui left the restaurant.

Placed in police custody, the men quickly confess. “We waited, then the little one got a call from the player’s friend who said they were getting out of the car and we had to go. The little one and his buddy then put on a balaclava then it was the little one who took an iron bar and they went out in the direction of the players (…) It lasted two or three minutes and then they came running back. At that moment, the player’s friend called the de Villeneuve, telling him that what they had done was not enough and that they had to go back to break his knee. Another suspect claims to have heard this same “little” retort: ​​”How is that not well done? How is that she can still walk? I gave a good blow to the knee. Normally she won’t be able to play tomorrow’s game as expected ! “

always according to The Parisian, who therefore obtained the investigation report from the PJ of Versailles, one of the attackers of Kheira Hamraoui, identified as Manzi N. and aged 18, confessed before the investigators to having received the sum of 500 euros to attack the PSG player and handicap her sportingly. But he would not be the author of the blows with the iron bar. The police suspect a still unidentified man, who would be linked to organized crime, whom no one wants to denounce for fear of reprisals.

What do we know about the attack on Kheira Hamraoui in November 2021?

According to the newspaper The Team who first reported the facts in 2021, Kheira Hamraoui was attacked on November 4, after an evening between the players and the staff of PSG, near the Bois de Boulogne, in the Paris region. When they had just dropped off one of their partners in front of her home, Aminata Diallo and Kheira Hamraoui, who were sharing the same vehicle, saw two strangers appear, their faces hooded. The two men would have asked the two players to open their doors. Kheira Hamraoui reportedly tried to resist as his attacker grabbed an iron bar. Once on the ground, she will receive several violent blows to the level of the legs.

In L’Equipe on November 17, 2021, some key elements of the attack were revealed. After dropping off Sakina Karchaoui, Aminata Diallo and Kheira Hamraoui would have taken to the road again and “a few moments later, having arrived at “a truck or a fairly high van”, parked on the left of the road, the two players would have seen appearing in front of the hood of their car, two strangers, faces masked by black balaclavas. “At that moment, I don’t see a weapon. They immediately start shouting: ‘Open the door! Open the door!”, The player would have explained to the BRB police. “The one who was on my side grabbed me and pulled me out of the vehicle. Before, he grabbed a rectangular iron bar that he had hidden in his pants or under his sweater. He gave me a first blow from the first moments of the attack to force me out of the cabin. I fell on the road then on the right side of the roadway. My attacker hit me with an iron bar several times. I saw that he was mainly aiming at my legs and I was trying to protect myself with my hands.”

During his hearing, Kheira Hamraoui would also have described the attackers quite precisely. The latter would be aged “20-25 years”, “about 1.85 m”, “thin build”, “dressed in dark”. She would also have added that they had a “scum accent” (sic). Investigators would seek from the beginning of the case to understand how the car could be spotted and then blocked so easily. Kheira Hamraoui reportedly explained that two other of her teammates, Jordyn Huitema and Celin Bizet Ildhusøy, told her that when she left the restaurant, they saw a car following them. Finally, according to L’Equipe, the police do not rule out the track of a geolocation beacon, a surveillance device that would be frequently used in the middle of organized crime.

Why was Aminata Diallo initially suspected in the attack on Kheira Hamraoui?

Why was Aminata Diallo, the PSG player, teammate of Kheira Hamraoui, placed in police custody in mid-November 2021 and mid-September 2022? According to several sources, the track of an internal rivalry within PSG was quickly explored by investigators. After the aggression of November 4, 2021, Kheira Hamraoui could not indeed honor his place as a starter in the Champions League against Real Madrid while Aminata Diallo, his competitor in the same position in midfield, was a starter. Called up to the France team after two years of absence, the victim also had to forfeit and was replaced by … Aminata Diallo.

According to L’Equipe, Aminata Diallo was “very cooperative” and “very correct” during her first police custody, in November 2021. The midfielder denied having the slightest involvement in this attack and would also have assured that he has no interest in attacking his teammate and friend Kheira Hamraoui in this way. The footballer had at the time been cleared of all suspicion. His lawyer, interviewed by BFM TV on November 16, had in passing castigated the treatment of his client. “I am very happy, definitely I believe, that my client is exonerated,” he confided. “She came out free from police custody, in my opinion, infamous, scandalous and inconsistent. Infamous because they brought shame to her and all her family. Scandalous because she came out without any charge is brought against her and inconsistent because it seems that the investigation is being refined, that other avenues are being studied. I still ask myself the question of a double standard justice. A strong justice with the weak, weak with the strong. We cannot have an extremely cautious justice with the strong, the powerful, the stars and a hasty justice which crushes, in its judicial system, the little people, the unknown, the anonymous. This is no longer acceptable”, he had lamented.

What was the reaction of Paris-Saint-Germain?

The PSG, aware of the case, had produced a press release in November 2021, taking note of the police custody of Aminata Diallo. “Paris Saint-Germain takes note of the detention this morning of Aminata Diallo by the SRPJ of Versailles within the framework of the procedure opened following an attack last Thursday evening against players of the Club. Paris Saint-Germain condemns the violence committed in the strongest possible terms. Since the evening of Thursday, November 4, the Club has taken all necessary measures to guarantee the health, well-being and safety of its players. Paris Saint-Germain is collaborating with the Versailles SRPJ to shed light on the facts. The Club is attentive to the progress of the procedure and will study the follow-up to be given.” After his release, PSG again communicated, “the club remains at the side of its players to enable them to overcome this ordeal and quickly regain serenity. Paris-Saint-Germain reiterates its confidence in justice to make all the light on the events”.

A time protected by PSG, with a ban on speaking publicly in this affair, the two players finally saw their respective careers disrupted by the scandal. Kheira Hamraoui remained on the sidelines of the group, being the subject of tensions with other players after the affair and struggling to find playing time at the end of the 2021-2022 season as at the start of this season. Arrived at the end of the contract at PSG at the end of the 2021-2022 season, Aminata Diallo has not been renewed and has been without a club since the summer of 2022. At the time of writing these lines, the Parisian club had not reacted to the second police custody of his former player.

Why did Eric Abidal’s name appear in the Kheira Hamraoui case?

The name of Eric Abidal, figure of the French men’s football team in the early 2000s, was mentioned for a time in the Hamraoui affair. According to several PSG players cited by Le Monde and L’Equipe in particular, Kheira Hamraoui would have indeed telephoned the former French international on November 5, 2021, the day after his attack. Why ? According to L’Equipe, this discussion was placed on the loudspeaker, making it audible to two teammates of Kheira Hamraoui: Sakina Karchaoui and Aminata Diallo herself. During this exchange, Hamraoui would have asked Abidal if his wife was capable of hurting him. The player would have answered in the negative before discovering “with amazement” the violent aggression.

According to the account of the first hearings relayed once again by The Team, Kheira Hamraoui and Aminata Diallo both confirmed that they heard the attackers say to the victim: “So how do we sleep with married men?” As a reminder, Eric Abidal was the sporting director of FC Barcelona from 2018 to 2020, a period during which Kheira Hamraoui wore the colors of the club. The French international played for the Catalan club from 2018 until the summer of 2021 when she joined PSG.

Implicated, Eric Abidal’s wife, Hayet Abidal, indicated at the end of 2021, through her lawyer, that she wanted to speak to the police “in order to put an end to the rumor”. “Hayet Abidal has nothing to do with these facts”, added Me Nicolas Cellupica, specifying that his client, a mother, would make “no comment on this file”.

The surreal penalty that condemned Malaga has gone around Spain

Women footballers will be welcomed in an open-top bus