Junior, Appiah and Delmás, presented: “If we win two or three games, the dynamics change”

Day of presentations in the press room of The Rose Garden. As usual this season, the blue and white club organized a massive debut, in this case, with its three winter signings as protagonists: Lago Junior, Arvin Appiah and Julián Delmás. Accompanied by Manolo Gaspar, sports directorthe new blue and white signings left a clear message of positivity for what lies ahead: “If you win two or three games, the dynamics change.”

“We are in a difficult situation, we have come to help. The sooner we get out of this situation, the better for everyone. We will take the pressure off, it is not comfortable for anyone to be in decline. We have come to help, it has been seen from the first moment. We are happy, I personally am very happy to be here.”

“I think it’s very important to connect with the human group. I’ve seen people who are willing to do things for their teammates. They’re guys who work hard to improve every day. I had been associated with Málaga for a long time, but I hadn’t been able to arrive. I thank everyone who has helped me to be here”.

“Every time I have faced Málaga I came with great enthusiasm. The fans were pressing, the field is spectacular, from the outside you can see many beautiful things. When I have the call from Manolo, I have not thought about it. He can tell you, no It’s been hard on my part.”

“Before signing with Málaga I had a conversation with him, he told me that he was looking for another type of profile, a fast and upright winger. That’s how the conversation went. I’ve been a versatile player, it’s a matter of the coach. All my career I’ve played more of a winger than a striker”.

“Everything that is said from the outside does not interest me, personally. I am focused on what we do here. We have Burgos on Saturday and we have to go out and win it. I hope the fans come to support us, we need them”.

What is missing to win?

“In the end it is insisting, the team competes quite well. We have spent many games in the red zone, that also affects. There is a psychologist who helps improve these aspects. If you win two or three games, the dynamics change. On Saturday you will see others stuff.

No signing in summer

“I did a good pre-season in Mallorca and Aguirre decided to stay with me. In these four months I haven’t had a leading role and I have decided to leave.” 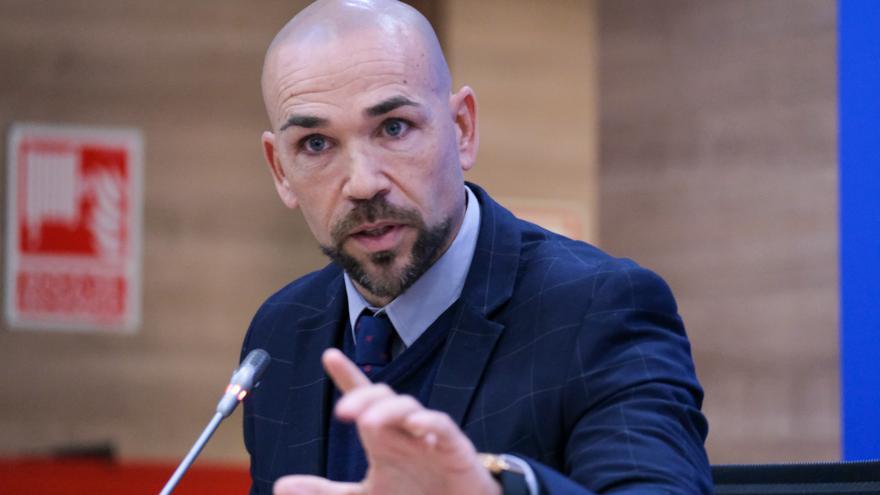 “I came from Mirandés to Mallorca, and we were saved. There are many games left and many things to do. It’s possible.”

“They have helped me to know the area where to rent the apartment. I knew how things worked, the decision was clear.”

“It’s a pleasure to be in a club like this. Málaga is right now in a position that it shouldn’t be in. We come to do our part for the team and give everything to achieve our goal.”

“He came a little earlier, I have been lucky enough to coincide with several of them. Several colleagues told me that the dressing room was incredible, the good vibes… Football situations make you not get victories by details. In this category it is difficult get out from below. They have welcomed the three of us very well. The adaptation is being very good”.

“There are great teams in the Second Division, but those historical clubs, for the city or for the social masses, you can’t say no. It was all very fast, I wanted to come. What they had told me was all good. I opted very quickly” .

“I have spoken several times with him, he has told me what he wanted from me to help the team, and that is where we are at.”

What is missing to the team?

“Málaga competes in all phases of the game, we are making mistakes or having bad luck at certain times, goals at the end of the game… We have to clear our minds for the next game. Our minds are set on getting the three points. The dynamics are important. Let the details fall on our side. There we will see a different Málaga”.

“You work well, you train well. There are no black sheep in the dressing room. We don’t have to go in to assess comments from outside the club. The work that is done every day is very hard to win on Saturday”.

“The team had just beaten Alavés and opted for the same eleven. I was able to make my debut at La Rosaleda. In this first round I haven’t played the minutes I wanted, the lack of rhythm is noticeable. I’m ready for when the coach needs me I’m going to fight for it.”

“We are here to enjoy and save the team. Málaga is a great team”.

“I have a lot of confidence in the team, in the possibilities. We are going to move this forward, we trust the management of the coach. We are working very hard, we follow Pepe Mel’s tactics. Together we will manage to reverse the situation”.

“It’s a club that has played in the Champions League. It has a great track record. I didn’t think twice about the fans, the city where it is located”.

“I was able to see Málaga-Alavés. The team has the qualities to reverse the situation. If we work hard, we will get Málaga out of the situation they are in. I was in a similar situation at Lugo”.

In summer, to Tenerife

“The sports director convinced me to go to Tenerife. When you don’t play, it’s hard. At Málaga they trusted me, here I can enjoy playing football”.