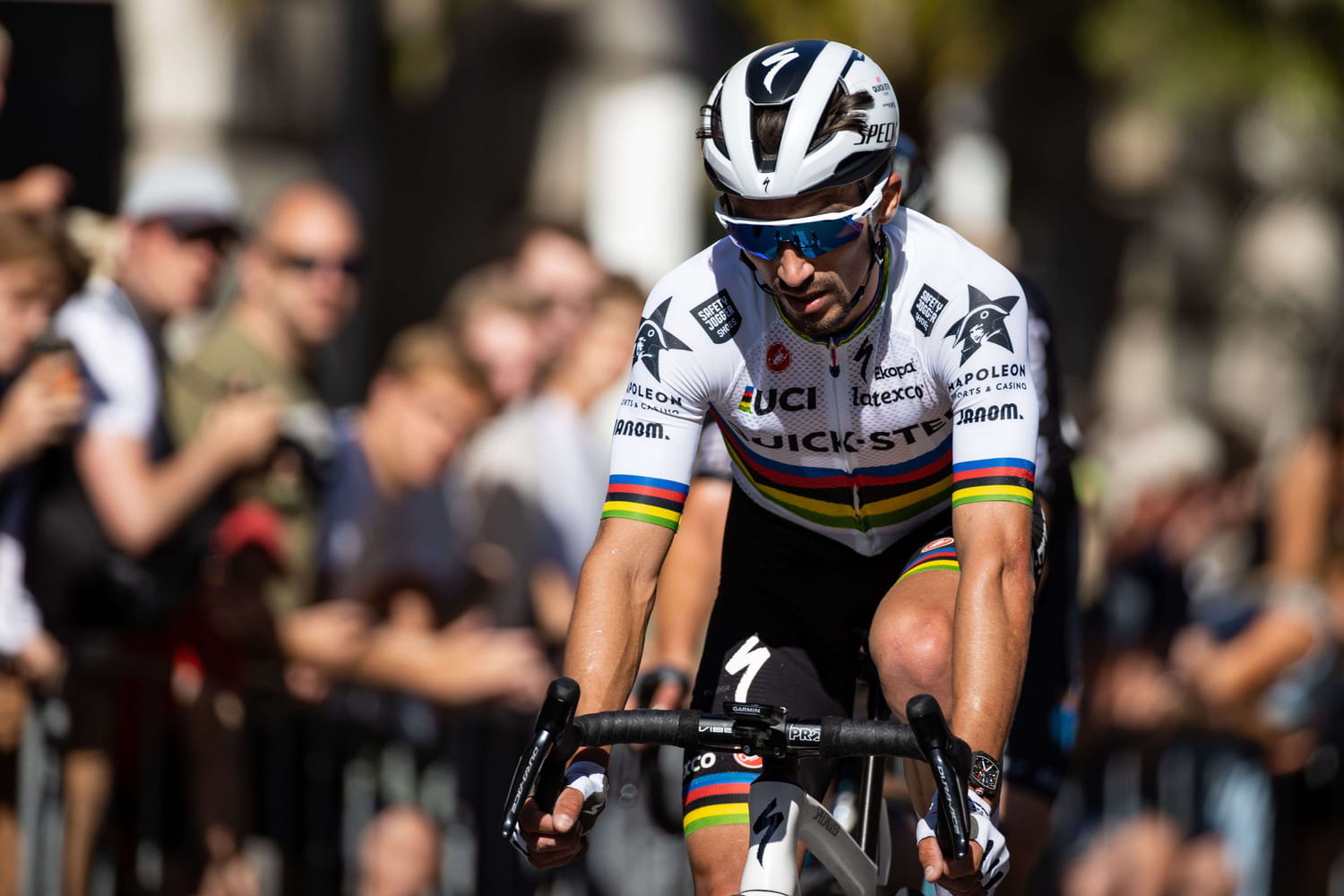 After two world championship titles in two years and a real demonstration at Imola in 2021, Julian Alaphilippe is not leaving at all with the favors of the forecasts on the occasion of the Road Worlds which are being played this weekend in Australia. But, in a one-day race, the Frenchman remains a reference and can play the leading roles thanks to his punch and his desire, especially since the profile of the world cycling championships is made for riders like Julian Alaphilippe. As a reminder, during his first big return to competition a few weeks ago, the double world champion had won a stage on the Tour de Wallonie at the top of the Mur de Huy which he knows particularly well. In Australia, the French will also have a team won over to his cause if he is in good shape and above all the confidence of his coach Thomas Voeckler who explained that “Julian” did not come to do extras in Australia.

On social networks, Julian Alaphilippe showed himself ready, by sending a message to his son, but also to “France” in view of these Worlds. “And yes my Nino the first you were almost there, the second in Leuven you were already there. How time has passed quickly since Imola. You fill me with happiness and I will give everything for you, for the French team, and for this complicated season but which will make me stronger”.

Short biography of Julian Alaphilippe Born on June 11, 1992, in Saint-Amand-Montrond, Julian Alaphilippe grew up in Cher and then in Allier, with his parents, Jacques (who died on June 27) and Catherine, who then gave birth to two other boys, Bryan and Leo. He took his first license with the Entente Cycliste Montmarault-Montluçon club. The young cyclist first flourished in cyclo-cross, a discipline where he became junior world vice-champion in 2010, before a serious knee injury slowed his progress. He then signed for three years in the Army team, in Continental pro. In 2012 and 2013, he became French cyclo-cross hopefuls champion, which allowed him to sign a contract with Etixx-IHNed, reserve team Omega Pharma-Quick-Step. Alaphilippe made his professional debut in 2014, the year he won his first victory, during the last stage of the Tour de l’Ain. In 2015, the Frenchman revealed himself to the general public by taking second place in the Arrow Walloon and from Liège-Bastogne-Liège, behind Alejandro Valverde. The following year, he participated in his first Tour de France, during which he slipped into a few breakaways in the mountains. During the road race at the Rio Olympics, he seemed the strongest, but a fall close to the finish destroyed his chances of a gold medal (4th). After a podium in Milan-San Remo and the Tour of Lombardy, Alaphilippe won a mountain stage in the 2017 Vuelta. stages and the jersey of the best climber on the Tour de Francestage victories on the Critérium du Dauphiné, at the Tour of the Basque Country… In 2019, he copiously garnished his prize list by winning his first “Monument”, in this case Milan-San Remo, but also a new Flèche Wallonne, the Strade Bianche, two stages of Tirreno-Adriatico, a stage of Dauphiné… but also and above all by carrying out a Tour de France of great beauty, during which he was on a par with the best for a long time, wearing the jersey yellow for 14 days, won two stage victories, the prize for combativeness and fifth place in the final general classification. In 2020, after a successful Tour de France (one victory, yellow jersey for three days), he obtained the Grail by becoming world cycling champion on September 27, at Imola.He was then less successful in the classics but still managed to win the Flèche Brabançonne.

Julian Alaphilippe counts four participations in the Tour de France. The Frenchman started on the Grande Boucle in 2016, with a bit of bad luck, as he was fighting for a stage victory towards Culoz, before a mechanical incident deprived him of a first success. He finished 41st overall, after wearing the best youngster’s white jersey for five days. In 2018, he returned to the French roads, after a withdrawal following a knee operation in 2017. Then in full possession of his means, he won the stage at the top of Grand-Bornand then the one arriving in Bagnères de Luchon . Thanks to his two successes and a great fighting spirit in the passes, the puncheur also won the polka dot jersey for the best climber. In 2019, Alaphilippe lives a dream Tour de France: he wins two stages, including the individual time trial in Pau, and spends a total of 14 days in yellow, before giving up his leader’s tunic at two days of arrival in Paris. His supporters even begin to dream, for a time, of a final victory, but the Auvergne rider finally finishes in 5th place in the final general classification, also being rewarded with the prize for combativeness. In 2020, the Auvergnat starts again on the same bases by winning the 2nd stage and by endorsing the yellow jersey which it will wear for three days. After losing his tunic on penalty, Alaphilippe falls into line, which does not prevent him from going on the offensive on many occasions. A way for him to prepare for the world cycling championship scheduled a few weeks later…

Sunday September 27, 2020, Julian Alaphilippe became the ninth road cycling world champion at Imola in Italy, the first since Laurent Brochard in 1997. After winning the race, the native of Saint-Amand-Montrond said: “C It was my career dream. I’ve been so close so many times but I’ve never even been on the podium.” In 2021, Alaphilippe did it again in Louvain in Belgium, retaining his title of world champion. In history, only six riders had achieved the feat of keeping the rainbow jersey for at least one more year, Julian Alaphilippe is the first Frenchman to achieve it, even if this performance was not really planned: “JI know what it’s like to spend a year in the rainbow jersey. I just wanted to do well and work for the team. It was not planned, I did not think I would be able to hold on.”

THE FRENCH KEEPS HIS TITLE AHEAD OF VAN BAARLE AND VALGREN AND WITH THE MANNER!! #Flanders2021 pic.twitter.com/Yeg8TKoBUL

Much in demand, Julian Alaphilippe finally decided to extend his contract with the Belgian team of Deceuninck – Quick-Step at the beginning of June 2019, for a period of 2 years. While several media were advancing an offer of several million euros from Ineos, the puncher accepted the offer from his manager Patrick Lefévère. We do not know the exact amount of his salary increase, but the French would have, according to the newspaper L’Equipe,salary included estimated at 2.3 million euroswhich would make Alaphilippe the best-paid French runner at the moment, ahead of Thibaut Pinot (2 million euros).

Julian Alaphilippe in a relationship with Marion Rousse

Very discreet for a long time about his private life, Julian Alaphilippe now forms a rather media couple with Marion Rousse, a former professional cyclist, now a consultant on France TV and also deputy director of the Tour de la Provence. The young woman, who was in a relationship from 2008 to 2019 with Tony Gallopin, another French cyclist, confided in the subject of this new relationship, on April 17, in the columns of Parisian. “No matter my private life. I will always do my job the same and it is the most important for me, she had specified. In life, the priority, of course, is to be happy, we are, That’s all I can say”. The day before, Julian Alaphilippe had notably insisted, in L’Equipe, on the “chance” he had to share confinement with the former champion, in Andorra: “She is really adorable, she supports me, encourages me, a guy like me who is hyperactive, who needs to get some fresh air often”. Julian Alaphilippe and Marion Rousse also announced at the end of January 2021 that they were expecting their first child.