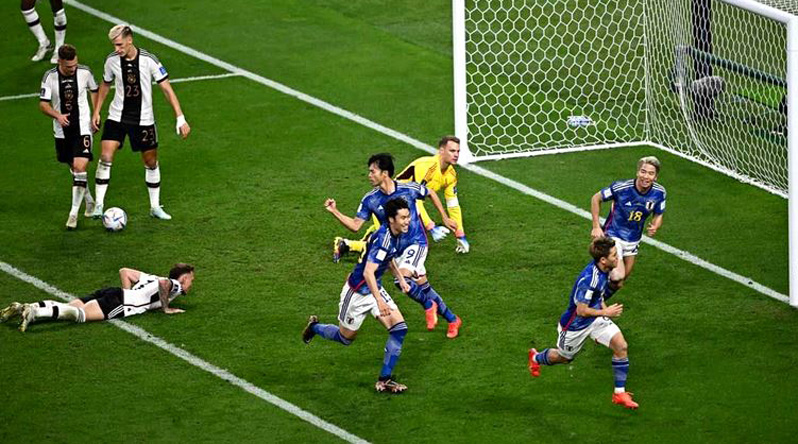 Sports Desk: Germany played big in Qatar World Cup. Hansie Flick’s team had to leave the field with their heads bowed in their opening match. Lost to Japan 2-1. However, Germany was far ahead in all aspects of history, tradition, statistics, and strength. But today it did not help the German. They continued to be villains in Japanese fairy tales.

Qatar World Cup may have seen the best match of the tournament so far. Momentary attacks and counter-attacks are causing tension at every moment of both the teams. However, it may seem that the best team in the world is on the field now. At the end of the match, Japan dominated the game, and the four-time World Cup winning team was helpless. Forced to leave the goal post, Manual Nayyar came up.

The German defense was shaken at regular intervals by the Japanese attack. Although the Asian country smiled with a 2-1 victory, but luck could have been helped by seeing at least a few more goals. Hansi Flick’s team would have had to leave the field with the shame of a big loss, especially if Manuel Neuer was not as incredible as always.

Germany and Japan met at the Khalifa International Stadium in Qatar on Wednesday evening at 7 pm. Germany started today without one of the most important players, Leroy Sane, due to injury.

From the beginning of the match, the Germans started playing in an aggressive manner. But the team survived despite stumbling in the beginning. Because Japan could have scored the first goal after 9 minutes of the match. But Maeda’s goal was disallowed due to offside.

After that, Hansi Flick’s disciples got very excited. The edge of attack also increases. In the 20th minute, Kimmich took the ball from German defender David Raum and passed it to Gundogan. But Gundogan sent the ball over the bar.

However, Germany’s luck finally opened after 30 minutes of the match. Japanese goalkeeper Gonda tackled German left back David Raum in the D-box. As a result, Germany got a penalty. Ilkay Gundogan took the lead from the spot kick.

Germany had a chance to double the lead in the first half. Kai Havarz scored a goal in extra time, but the referee disallowed the goal after checking on VAR.

In the second half, the fight between the two teams intensified. Musiala got the ball from the corner in the 51st minute. But a slightly nervous Musiala shot the ball over the bar. As a result, they missed another opportunity to score. A few minutes later Japan midfielder Mitoma tried to score past Rudiger but failed.

After 68 minutes, another opportunity was created in front of Japan. Asano received Sakai’s long pass on the right flank. But Rudiger cleared the ball again before taking the shot.

This time again, Germany attacked with the ball at its feet. German winger Serge Gnabry passes the ball to Jonas Hoffman, but the ball is cleared by Japanese goalkeeper Gonda. Gnabry almost immediately latched on to the floating ball and tried to put the ball back into the goal post, but he stopped him brilliantly to save the team from conceding a goal.

This time, Germany started to play desperately. But by that time the German defense was in disarray. At the end of the 80th minute, Kimmich was unable to capitalize on a corner.

Another substitute, Takuma Asano, a forward from fellow Bundesliga club VFL Bochum, scored the second goal shortly after when Niko slotted the ball past Itakura’s free kick. Four of Asano’s eight goals in Japan so far have come as a substitute player.

Germany could have conceded another goal in extra time, but Nico Schlotterback cleared the ball to save Germany from further embarrassment. After that, he tried to return to the match again and again, but his hopes were dashed by repeated shots. As a result, Germany lost 2-1 to Japan.