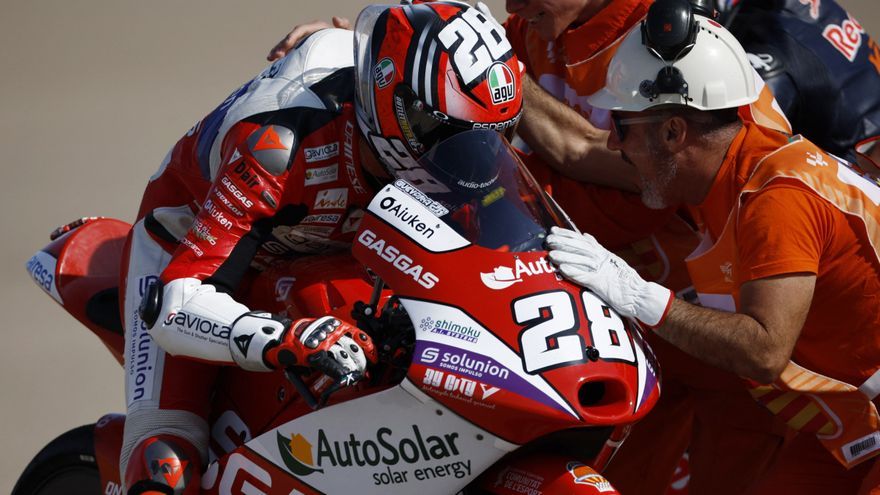 Izan Guevara commands and wins with authority in Aragon

The Spanish Izan Guevara (GasGas) achieved its fourth victory of the season by dominating the Moto3 Motorland Aragón Grand Prix from start to finish, allowing it to increase your advantage in classification Provisional World Cup to 34 points thanks to the poor result of their most direct rivals.

After Izan Guevara, the Japanese Ayumu Sasaki (Husqvarna) and the Spanish Daniel Holgado (KTM) also finished on the podium, while Sergio García Dols (GasGas) finished thirteenth and Dennis Foggia (Honda), fourteenth, giving up a lot of ground in the fight for the championship to his rival, who now has 34 point lead relative to his teammate.

Ayumu Sasaki’s (Husqvarna) team was not too lucky on the qualifying day as the unsportsmanlike attitude of two of its mechanics by hindering the departure of the Spaniard Adrián Fernández (KTM), right in the workshop next door, to prevent him from leaving after the slipstream of the Japanese, it was a reason for sanction by the panel of commissioners, who decided to fine this behavior with 2,000 euros, in addition to suspending them from their duties for two grand prizes.

The sanction must be fulfilled by the two mechanics in the races in Australia and Malaysia, due to the restrictions in Japan as a result of the coronavirus pandemic, according to the statement made public by the organization of the championship, while Ayumu Sasaki himself He went to apologize to the rider and the KTM team after training for the behavior of his mechanics, as did the team’s head, the Italian Max Biaggi, six-time motorcycling world champion, via Twitter.

Sasaki was not too affected by the situation experienced and although at the time of the start he could not beat the author of the pole position, the Spaniard Izan Guevara, who came out like a shotwas placed in the leading group and in the wake of the championship leader.

Guevara, used to looking for his best times alone, tried break from the first meters the race with a very strong pace that could only be followed initially by Ayumu Sasaki and the also Spanish Daniel Holgado, with the Japanese Tatsuki Suzuki (Honda), Iván Ortolá (KTM) and the British John McPhee (Husqvarna), behind them, and something else behind a main group headed by the Turkish Deniz Öncü (KTM), in which were the rest of the favorites of the category. In just three laps Guevara had already opened a important gap regarding the chasing quartet and the rest of the main Moto3 riders “scattered” around the track in various groups.

The fifth lap did not bring any new changes but it did clearly define the groups, with the trio formed by Izan Guevara, Ayumu Sasaki and Daniel Holgado featuredthe quartet formed by McPhee, Öncü, Ortolá and Suzuki already almost four seconds behind, and these with an advantage of just over a second over the largest group in the race led by the previous leader of the championship, the Spanish Sergio García Dols ( GasGas).

The most direct rival in the fight for the world title, the Italian Dennis Foggia (Honda), was not going through his best moment and had quite a few problems holding on to the last places in Sergio García Dols’ group, from which he ended up being cut off just a few laps later and almost out of the points zone, which could mean saying goodbye definitively to the fight for the title world.

Guevara remained firm and constant in his rhythm, but failed to detach from the pressure of Sasaki and Holgadowho were clearly going to be the protagonists of the fight for victory, since the chasing group was already almost seven seconds away and Dennis Foggia showed no signs, from behind, of being able to advance in the classification, riding alone in a more than discreet fifteenth position.

In the chasing group of the trio, in addition to Deniz Öncü, there were up to eleven pilots, with majority of Spanish representationbecause David Muñoz (KTM), Adrián Fernández (KTM), Jaume Masiá (KTM), Iván Ortolá (KTM), Xavier Artigas (CFMoto), Sergio García Dols and Carlos Tatay (CFMoto), among others.

David Muñoz and Adrián Fernández were involved in an incident that meant that the second had to go off the track and return to the tail of that group, while the first was penalized for this action with a long lap penalty.

With a sustained rhythm of Izan Guevara, the first scapegoat was Daniel Holgado, who was staying off the hook in third positionleaving the fight for victory to his rivals, who stood firm until the last lap, in which the Spaniard was able to consolidate his leadership to sign the fourth victory of the season and consolidate the first position thanks to the results of his closest rivals. direct.

Kohli will open the World Cup