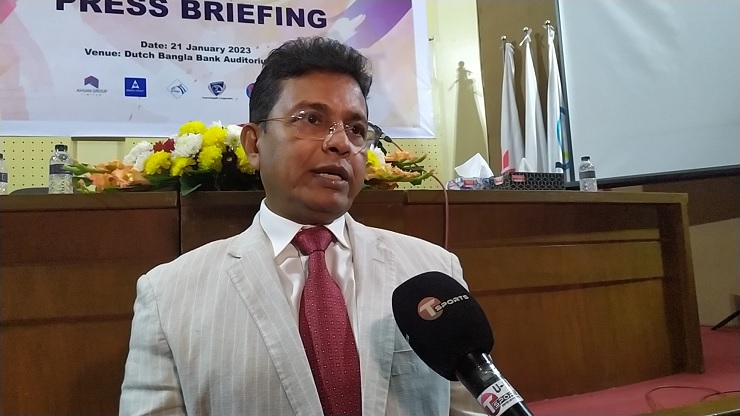 Additional IGP Habibur Rahman, Chief of Tourist Police, said that Bangladesh needs a permanent big field to host international kabaddi tournaments. He said, our kabaddi playing area is so small, due to which international tournaments cannot be held here. We need a permanent field.

He said this at a press conference on the occasion of Corporate Women’s Kabaddi League 2023 organized by Bangladesh Kabaddi Federation at the Bangladesh Olympic Association Auditorium in the capital’s Gulistan on Saturday.

Habibur Rahman said that Prime Minister Sheikh Hasina has taken various activities to involve and advance women in everything for the development of women’s leadership. Kabaddi, the national game of Bangladesh, cannot be left behind with the Prime Minister’s movement to advance women. Keeping that in mind, we have taken various initiatives to advance women in this sport. Among these we organize Kabaddi games nationally for women. This is the first time we have organized a corporate kabaddi league for women. Initially six teams participated here. By playing Kabaddi for the first time, our girls will get a chance to benefit financially.

Additional IJP said that kabaddi is still the favorite game of people of Bangladesh. Kabaddi is more popular than football. First the popularity of kabaddi game is more followed by the popularity of football. I admit there are flaws in our organization in the game of Kabaddi. We only do centrally. However, those who have district sports organizations across the country, should also be sincere in this matter. Then we can do something good. Our federation may have some weaknesses. I myself am very busy as I am involved in many things. I may not be able to cooperate with you as I should due to busy schedule.

In response to a question, he said that our playing area is so small that international tournaments cannot be held here. We have informed the minister to make a permanent ground for us. Kabaddi world knows that Kabaddi is the game of Bangladesh. After I won the Bangabandhu Cup, the main attraction for those who play Kabaddi all over the world is the Bangabandhu Cup. Even then we couldn’t do it. We have seen a place on the other side of Dhaka Buriganga, so that a little bigger field can be made there. We had a conversation with the minister. He himself spoke. If we get a field there then we may be successful in making a new international standard venue.

Habibur Rahman said, due to the global financial crisis, we went back a little. If not, it might have been done sooner. He also said that a national team will be formed from among the six teams participating in the game.

Former coaches and players of the national team have been made coaches and assistant coaches. Besides, opportunities are also given to newcomers. Ashraful Alam Matlab Thunder, Moshiur Rahman Narayanganj Gladiators, Bengal Warriors. Yunus Ali, Bazlur Rashid is the coach of Dhaka Twelve, Ziaur Rahman of Narsingdi Legends and Badsha Mia of Techno Media.

About 100 female players have been trained in residential camp for three months along with national team players selected from IGP Cup Under-18 Youth Kabaddi held in January last year to improve the standard of corporate league play. Six groups have been made with 78 people from among them.