The Indian team was expected to perform well in the 2023 Hockey World Cup, but these hopes were dashed. Team India had to face defeat against 12th ranked team New Zealand in the crossover match played at Kalinga Stadium in Bhubaneswar on Sunday (January 22). Till the stipulated time, both the teams were tied at 3-3, due to which the match went to the shootout. New Zealand won 5–4 in the shootout. If seen, the Indian team could not perform its best in this tournament from the very beginning.

Had to play draw against England

World number-6 The first match of the Indian team was with Spain. India would have won the match 3–0 against the eighth-ranked team had captain Harmanpreet Singh not missed a penalty stroke. Then India had to settle for a 0-0 draw against England, ranked fifth in the world rankings. After this, Team India was expected to win against 14th ranked team Wales, but it could only win 4-2. In the match against Wales, at one time the score was 2-2, in which case Team India could have lost.

Click- New Zealand broke the dream of crores of fans, Team India out of the World Cup

India finished second in Group-D after the end of the group stage. India had 7 points from three matches with two wins and one draw. From this group, England entered the direct quarter-finals by defeating India on the basis of better goal average (+8). That is, if the Indian team had defeated England or its victory margin against Wales and Spain would have been bigger, then it would not have had to participate in the crossover match.

Defense scattered in cross over

Goalkeeper Sreejesh injured on the spot

At one point in the shoot-out, India was trailing by a margin of two goals, but PR Sreejesh made excellent goalkeeping and made three consecutive saves to bring India closer to victory. Captain Harmanpreet Singh could not score a goal here, due to which the match was again equal. Here Sreejesh also went out of the field after getting injured and Krishna Bahadur Pathak came in his place. Then Krishna Bahadur Pathak failed to stop the goal on two occasions and India had to lose the match. In the shootout, both the teams made 9-9 attempts, in which New Zealand scored on 5 occasions and India on 4 occasions. Abhishek, Harmanpreet, Sukhjeet and Shamsher could not score from India. 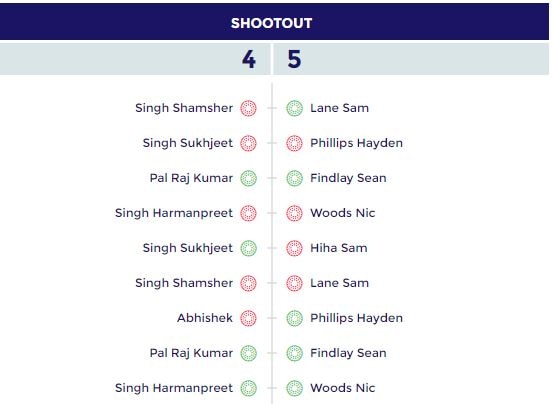 India’s performance in the last World Cup was also disappointing. Then, despite topping the group, the Indian team’s campaign ended in the quarter-finals itself. India’s performance in recent years has been excellent, so this time there was a lot of expectation from the team. Team India won the bronze medal in the Tokyo Olympics 2020. At the same time, in the FIH Pro-League, the team achieved the third position by showing excellent performance. Apart from this, the Indian team visited Australia at the end of 2022 for a five-match series. Where he won a match against Australia.

48 years of drought has not ended

The Indian team, which won eight gold medals in the Olympics, won the only World Cup 48 years ago i.e. in 1975. Then in the event held in Kuala Lumpur, under the captaincy of Ajitpal Singh, Team India became the champion. Since then, Team India has not even been able to reach the semi-finals. Earlier in the first World Cup in 1971, India had won bronze and silver in 1973. After this, from 1978 to 2014, India could not go beyond the group stage. India definitely reached the quarter-finals in 2018, but this time its performance returned to the old pattern.