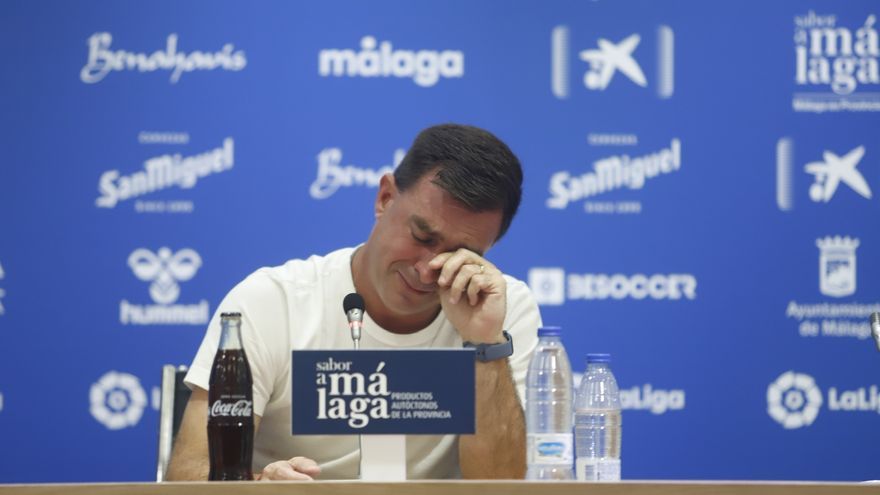 The goodbye of one more Malaguista. A true farewell, with feelings on the surface. Supported by the entire squad, the sports management, members of the leadership and practically all the club’s workers, Pablo Guede said goodbye to Malaguismo at a press conference in which he was very affected and unable to hold back his tears for the way in which it has had to go, sooner than anyone would have liked. Despite the fact that he has had no luck as a coach, the blue and white fans will always remember him for the myth and key piece that he was as a player. And the he will always have immense affection for the clubas his words showed.

It was not an easy day for Guede. And he wanted to start by having a few words for all those who have been part of his project: “Everyone came… I was going to read something, I’m going to try it… It’s been 25 since I arrived. I lived the best I lived as a footballer, I became a Malaga native, I had to leave and always with the illusion of returning. I had to return as a coach in a screwed up situation. We were able to reverse the situation between all of us, not because of me. If Malaguismo is united, no one can beat us. We put together this project with all the enthusiasm in the world, with the dream of returning to First division. This wonderful group of footballers is one of the best I had. From the heart I say it. They left everything, they did not stop training for a single day. It is to thank you. He wanted to say goodbye as the club deserves. Feelings are stronger than reality. This is football.”

“What really remains in life are people. I take a lot of friends with me, the people in the office had to put up with me several times. I thank them for everything they did on a day-to-day basis. I try not to forget anyone. To the girls and boys from security, the doors would open for me at 5:45 in the morning.To José María and Manolo, we undertook something with tremendous enthusiasm. They won a lot of cups that are not given, that of humility, that of work, that of perseverance. This squad wins them. To all, thank you from the bottom of my heart. To the coaching staff, they were my faithful squires. We had a dream, they are the ones who really put up with me. I want to thank you from the bottom of my heart, you were always by my side. I hope I do not forget anyone. La Cueva, which in summer until 10 or 11 at night they were looking for the best. The props, the physios, poured into everything I wanted to do. I’m not leaving hurt, this is football. I leave with all the love of these people. I would like to thank the press, they treated me with the greatest respect that one can feel, regardless of the criticism, they do their job. The affection that one feels is there and it will not change. I leave proud, I fulfilled the dream of my life. I wanted to enter with a full court and I did it. I am privileged. Support this whole group to death, it will give us great satisfaction,” continued the Argentine.

At these words, the entire room melted into a heartfelt applause as Guede burst into tears. Then the questions from the media began…

“With everything. With the good, with the less good. With the work of hours and hours. With the regular moments, only we know what we suffer on a daily basis. With the “Guede go now”, that’s football. It was my dream, I’m not going to forget anything.”

“It’s not about pressure, it’s not about the desire to continue. We look each other in the face, we decide together. There are no gaps between us. We decide what is best for the club, it is above us. There is a reality, six games and we won one. We lost five. We thought it was the best and we did it.”

“The reality is that I’m not going to make excuses. We all know the circumstances we go through and ends with another very painful circumstance, with a non-penalty. The results are there, they are the bosses and it could have been avoided… or not. It is what it is. Face reality.”

“Let them say so. These guys are destined for success. This group is worth gold. I don’t know if we recorded the last training session in Tenerife, with those who didn’t play, the training they did on Monday… Knowing that the coach was touched, that’s not done by any group. Do not lower your arms, this is to continue. Football doesn’t take anything from anyone.”

Farewell or see you later?

“I can’t have a thorn. The motor of people is the dreams with which they move. We all have them. As a player I was able to ascend three times and I was champion three times. As a coach I had the dream of coaching San Lorenzo and Málaga and I fulfilled them. I am a privileged I am lucky to have come out to the San Lorenzo field and to have come out champion. And having played, been promoted and coached Málaga. No thorn.”

“I’m not hiding. Although we haven’t had the results, I have to say goodbye like this. I’m very sincere, always. This fills me with pride, that they are all here. In life what remains are personal relationships. I take a lot of affection, of values. It is what life leaves you. It doesn’t change the love I have for these colors and this city. What better to say goodbye in front of all of you, employees, footballers… It is an honor to have had this group.”

Wednesday was presented Pepe Mel and today, Thursday, was the time for Pablo Guede to say goodbye to Malaguismo at a press conference after his time as coach of Málaga CF ended after a poor start to the preseason that has forced the Argentine and the club to take the decision that he leave office through a “friendly agreement”.