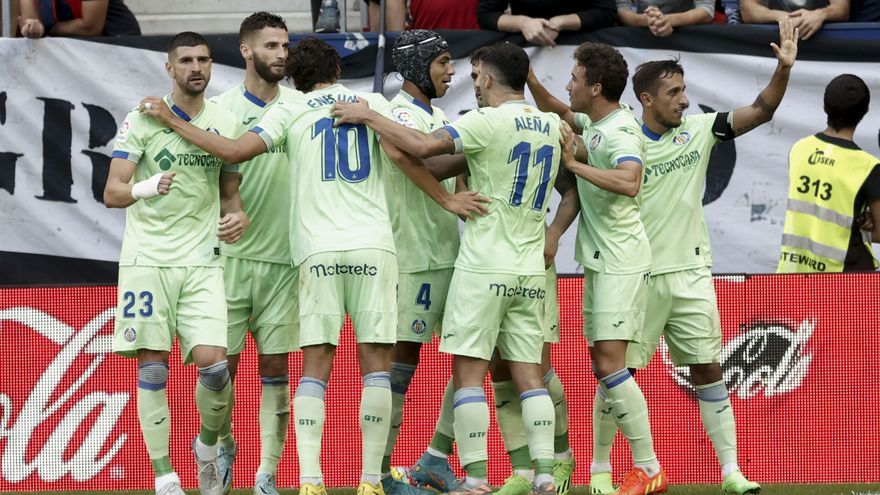 The locals repeated the starting eleven that left such good feelings in Almería with the idea of ​​extending what was seen a week ago and thus continue undefeated in Sadar.

The clash began with ten minutes of peace by both teams before the storm created by the rojillos. Rubén García starred in the first clear chance of the clash. The ’14’ stepped on the area, got rid of two opponents by cutting inwards and shot at goal with the misfortune that the ball was repelled by a post.

A minute later, Soria signed a stop of feline reflexes. The Getafe goalkeeper pulled out a prodigious hand after a header from Darko at the near post to avoid a 1-0 draw after a corner taken by Moi Gómez.

The visitors could not create danger and Chimy Ávila and Budimir were about to give them a scare. The Croatian gave in to his teammate with the spur before the Argentine hit him with a deep header. The striker ran to control the ball and shoot on goal, but a quick Duarte came to the cut to disrupt the action.

Osasuna was in full swing and Getafe, subdued, but football suddenly decided to change the script. Iglesias took advantage of an indecision of Nacho Vidal inside the area to make it 0-1 with his left foot. El Sadar turned to his player so that his mistake would not influence the team’s mood.

Those of Arrasate did not change their idea and followed their own. An iron shot by Chimy Ávila on Iglesias’s shin in the 43rd minute led to his direct expulsion after the VAR review. In this way, he came to rest.

Despite the negative situation for Osasuna, Arrasate did not introduce changes and the Navarrese tried to string together plays in a game with many cuts due to fouls. At Getafe, Aleñá and Maksimovic began to generate football.

Abde entered the field to give his team speed and depth down the flank along with Rubén Peña, who was returning from injury. Those of Sánchez Flores did not dominate the situation at all, but luck smiled on them again.

The Uruguayan Gastón Álvarez pushed an acrobatic shot by the Portuguese Duarte on the goal line. Getafe silenced a Sadar that he saw with options to tie his team until that moment.

Osasuna’s rebellious character was not enough to get a positive result against a Getafe that did not need much to achieve a golden victory in a stadium where no team had scored points this season.

Referee: Isidro Díaz de Mena (Castilian Manchego Committee). He showed a yellow card to Rubén García, Nacho Vidal, Peña, Budimir, Moncayola, Arrasate and David García, by Osasuna; and Duarte and Milla, from Getafe. He sent off Chimy Ávila with a direct red card in minute 43 and Milla for a double yellow card in minute 91.

Incidents: Match corresponding to the sixth day of LaLiga Santander played at El Sadar in front of 18,255 spectators.