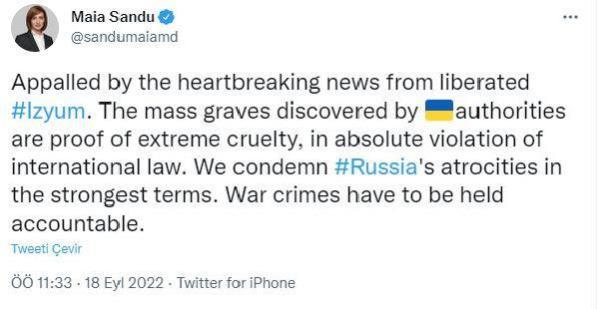 From Moldova to Russia

Moldovan President Maia Sandu said in a statement about the mass grave found in the city of Izyum, which Ukraine recaptured, “We condemn Russia’s brutality in the strongest terms. War crimes must be held to account.”

Moldovan President Maia Sandu made a statement about the mass grave found in the city of Izyum, which Ukraine took back, on her social media account. “I was horrified by the heartbreaking news from the liberated Izyum. The mass graves found by the Ukrainian authorities are evidence of persecution, in absolute violation of international law. We condemn Russia’s atrocities in the strongest terms. War crimes must be held to account,” Sandu said.

“WE ARE PUNISHED FOR ALL WAR CRIMES”

On the other hand, Czech Foreign Minister Jan Lipavsky also called for the establishment of a special war crimes tribunal in a statement regarding the discovery of the mass grave, and said, “Russia left mass graves in the Izyum region where hundreds of people were shot and tortured. Such attacks against the civilian population in the 21st century are unthinkable. “We cannot ignore it. We are in favor of the punishment of all war criminals. I call for the speedy establishment of a special international tribunal that will prosecute the crime of aggression.”

Ukrainian President Volodymyr Zelenski, in his daily address to the nation after the recapture of Izyum, announced that there was a mass grave where those who lost their lives as a result of the attacks were buried in Izyum, which passed from the control of Russia to the control of Ukraine. “A mass grave was found in Izyum in the Kharkiv region. The necessary procedural actions have already begun there. Tomorrow there will be more clear, verified information. Tomorrow there will be Ukrainian and international journalists in Izyum. We want the world to know what really happened and what the Russian occupation led to,” Zelenski said. . Bucha, Mariupol, now unfortunately Izyum…” he said. Hundreds of unnamed single graves and a mass grave of more than 17 Ukrainian soldiers were found in the discovered area, according to information provided by the authorities.

Graves Will Be Opened One By One Head of Ukraine Presidential Office Andriy Yermak stated that each grave in the mass grave containing people who lost their lives as a result of Russian missile attacks on residential areas and some of whom were hastily buried by the local people will be opened one by one, and said, “Mass graves in Izyum, Kharkiv region. “The necessary procedures have already begun. All the bodies will be exhumed and sent for forensic examination,” he said.