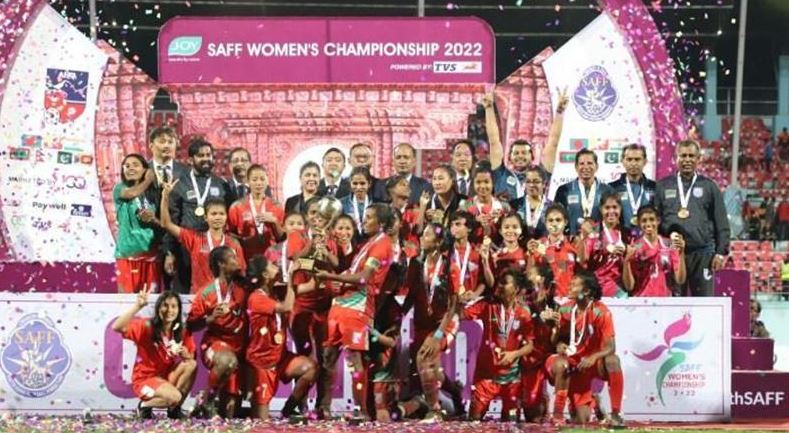 For the first time, the girls of Bangladesh got a taste of the excellence of South Asian football

Sports Update Desk: The women’s SAF title has been elusive for the red-green representatives for so long. The title drought finally ended. For the first time in history, the girls of Bangladesh tasted the superiority of South Asian football. In the final, Sabina-Krishna defeated the hosts Nepal 3-1 to become champions.

Sanjida-Sapnara has given beautiful football since the beginning of the girls’ SAFF Championship. After defeating record five-time champion India, this time the girls defeated Nepal.

The final also saw rhythmic football. The girls caught Nepal by creating an impenetrable wall in defense with fast attack-counter attack, perfect passing. Bangladesh is the undefeated champion. They conceded only one goal in the entire tournament. That goal was scored only in the final.

The country’s girls reached the final for the first time in 2016. But India snatched away the trophy by breaking Bangladesh’s dream in the Seva title-deciding match. Coach Golam Rabbani Chotan’s disciples eliminated that shortcoming by defeating the favorite Nepal.

The boys have played in the SAFF final three times in total. But the champion has been once. They won the only title in 2003 defeating Maldives. Neighboring India broke the dreams of the red-green jersey holders on the remaining two occasions.

Krishna Rani Sarkar doubled the goal difference in the 40th minute of the match. Krishna did not make any mistake to get the ball from the wrong pass of the opponent and put it in the net.

In the 70th minute, Nepal redeemed a goal. He didn’t delay getting the ball inside the box. Zoral cross shot the ball into the net Basnet. Rupana tried but could not stop the ball. This is Bangladesh’s first goal in the tournament.

Bangladesh scored a third goal in the 77th minute from a counter attack. Nepal is cornered by this. Krishna dodged the Nepal goalkeeper’s eyes after receiving the ball from his teammate. In this, the girls of the country took the joy of losing the Himalayan country for the first time.

Frida, “the most beautiful tuza” lights up social networks after Pachuca’s victory