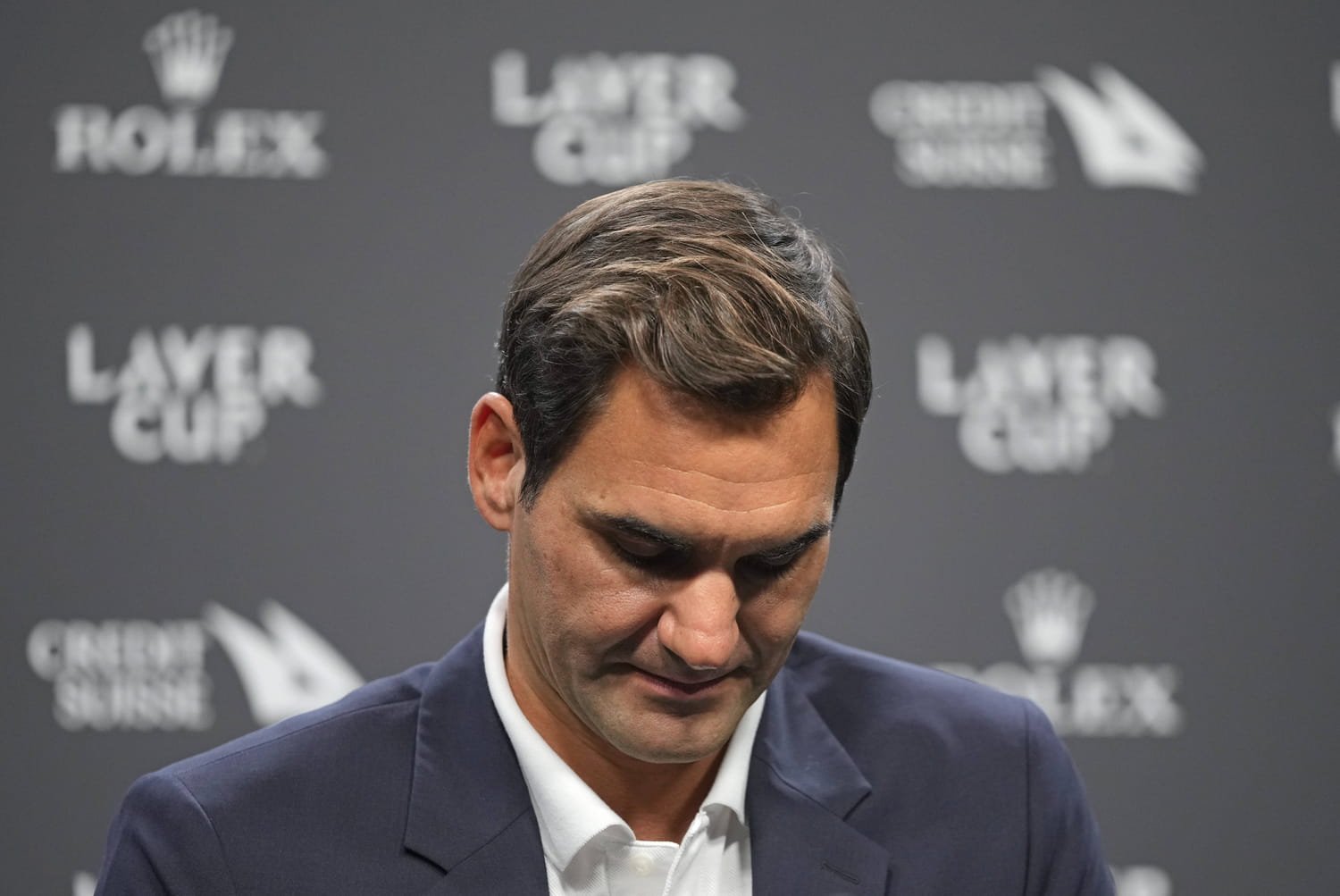 Federer’s retirement: why is he leaving? His explanations

While some people are hoping that Roger Federer’s retirement announcement isn’t serious and that he will return, the Swiss has likely ended fans’ dreams, explaining the process that led him to retire from the courts of tennis. “At the beginning of the summer, I couldn’t increase the level of intensity in training. In the rehabilitation phase, there are always ups and downs. But in my case, you had to be very careful “I was very tired from my efforts. I didn’t want to take too high a risk. I underwent several operations. Tennis is a brutal sport, you have to be able to play several long matches in a row. The hard part hardest is when you realize it’s over. I thought for a long time that I could come back to the circuit. Everyone wants to keep playing forever. But everyone has to leave the circuit at some point. “

On retiring from the Laver Cup, the Swiss said he did not feel like leaving for a new Grand Slam tournament. “Retiring to London? I have great memories here. I didn’t want to do it at the US Open, I knew I couldn’t be there. Having Bjorn Borg on the bench for my last match, with all the guys next door are great. I’ve always felt sad watching players retire, 90% of the time you lose and you’re on your own.”

Roger Federer in a few matches

From angry to a true artist on the courts, Roger Federer marked several generations with his talent, his matches and his trophies. How not to talk about his career and Wimbledon. If he is at home on a court, it is in London with 8 Grand Slams in total. Several dates are to be remembered. In 2001, the young Swiss took over from a certain Pete Sampras, who had not lost at Wimbledon since 1996 before meeting this young 19-year-old. In 2008, the anthology final against Rafael Nadal, interrupted three times by the rain before the Spaniard scored the match point to win 6-4, 6-4, 6-7, 6-7 , 9-7 after 4:48 of fight.

The year 2009 is also a year of consecration for the Swiss. After three failures in the final against Rafael Nadal, Roger Federer finally wins Roland Garros, the only Grand Slam he lacked, against the Swede Robin Soderling. In the same year, the Swiss won a new anthology final at Wimbledon against the American Andy Roddick 5-7, 7-6, 7-6, 3-6, 16-14. In 2012, the Swiss however missed a very big meeting with his defeat in the final against Andy Murray after having achieved a new historic match against the Argentinian Del Potro (3-6, 7-6, 19-17) .

“Of all the gifts tennis has given me over the years, the greatest, without a doubt, have been the people I’ve met along the way: my friends, my competitors and, above all, the fans. who give life to this sport”, first writes the Swiss in his message. “As many of you know, over the past three years I’ve had to deal with challenges in the form of injuries and surgeries. I’ve worked hard to get back to full competitive form. But I also know the capabilities and limitations of my body, and the message it has sent to me lately is clear. I’m 41. I’ve played more than 1,500 matches in 24 years. The tennis has treated me more generously than I ever imagined, and now I have to recognize when it’s time to end my career.”

It’s a bittersweet decision, because I will miss everything the Tour has given me, continues Roger Federer. But at the same time, there is so much to celebrate. I consider myself one of the luckiest people on the planet. I was given a special talent to play tennis, and I did it at a level I never imagined, for much longer than I thought possible.”

“The last 24 years on the circuit have been an incredible adventure. Sometimes it feels like they have passed in 24 hours, but they have been so profound and so magical that I feel like I have already lived an entire life. I had the immense chance to play in front of you in more than 40 different countries. I laughed and cried, I felt joy and pain, and above all, I felt felt incredibly alive. (…) In tennis: thank you and I will never leave you”, he concludes.

For years, the rivalry between Roger Federer and Rafael Nadal has punctuated the tennis courts. With the announcement of the Swiss’s retirement, the Spaniard also loses a “friend”. Asked, his uncle Toni Nadal explains that his godson would never have been the same without Federer. “Of course not, because I believe that with Federer, Rafael always had to raise his level of play. And it was the same with Djokovic. These three players raised the level of all the others. is a very bad day for anyone who, like me, loves tennis.”

“Dear Roger, my friend and rival. I wish this day never happened. It is a sad day for me personally and for the sport around the world. It has been a pleasure and also an honor and a privilege. to share all these years with you, to live so many incredible moments on and off the courts. We will still have many moments to share together in the future, there are still many things to do together, we know that. For now, I really wish you all the happiness possible with your wife, Mirka, your children, your family and enjoy what awaits you. I will see you in London” launched Nadal on the networks.

Biography Roger Federer. Roger Federer was born on August 8, 1981 in Basel, Switzerland. Son of a Swiss father, Robert, and a South African mother of French and Dutch descent, Lynette, Roger grew up in Münchenstein in German-speaking Switzerland, not far from Basel and the German and French borders. He started playing tennis at the age of eight when he joined the club TC Old Bys, located in Basel, where he met Marco Chiudinelli, another Swiss professional player. If the Swiss takes time to decide between the yellow ball and football, he will eventually go to tennis where he manages to become national champion in the junior categories.

In 1995, Roger Federer joined the Swiss National Tennis Center where his beginnings were difficult. Away from his relatives, he must also learn French. The “Maestro” continued to progress and develop his game during his “junior” period where he finished world number one in 1998 after winning Wimbledon in boys’ singles and doubles. He ended the year by winning the Orange Bowl ahead of Guillermo Coria. He decides the same year to take the next step and go to the professionals where he will win a lot of trophies and build himself a legendary status.

Over the years, Roger Federer has been able to reinvent his game, as the greatest athletes can do. He surrounded himself with Stefan Edberg between 2014 and 2015 in order to develop his volleys, his climbs to the net and thus dominate the exchanges even more. A fruitful association for the Swiss whose technique is no longer to be demonstrated on the world circuit.

What is Roger Federer’s track record?

Since the beginning of his professional career, Roger Federer has won 103 ATP titles including 20 Grand Slam trophies (six Australian Open, one Roland-Garros, eight Wimbledon and five US Open). Six victories at the Masters at the end of the season, twenty-eight Masters 1000, a gold medal at the Olympic Games in doubles with Stan Wawrinka in Beijing in 2008, a silver medal in singles at the Olympic Games in London in 2012 and the Davis Cup in 2014 are added to his list. Since the beginning of his career, Roger Federer has played 1526 games for a total of 1251 wins for 275 defeats.

What is Roger Federer’s ranking?

World No. 1 for 310 weeks during his career, Roger Federer is one of five players to have finished at least five seasons in the place of No. 1 in the ATP rankings (with Rafael Nadal, Jimmy Connors, Pete Sampras and Novak Djokovic) . The first time the “Maestro” held the top spot was on February 2, 2004, and the last time was on June 18, 2018. The Basel native holds the record for the biggest gap between the first and last week instead of world n°1: 14 years and 4 months. For the first time since April 2001, Roger Federer is no longer the Swiss number 1. It was Henri Laaksonen who put an end to the twenty-one-year reign of the “Maestro”. Since July 11, 2022, “Roger” no longer appears in the ATP rankings.

What is Roger Federer’s fortune?

Thanks in particular to the winnings of the 103 titles he has won, Roger Federer has amassed since the start of his career in 1998 more than 130 million dollars ($130,594,339 m) in prize money. In 2021, the Swiss became the first billionaire tennis player after being the highest paid tennis player of the year for the 16th season in a row.

Who is Mirka, Roger Federer’s wife?

Since April 11, 2009, Roger Federer has been married to Miroslava “Mirka” Vavrinec, a former Swiss tennis player of Slovak origin. They met during the Sydney Olympics in 2000. Besides being his girlfriend, Mirka manages Roger Federer’s career.

Despite his success in tennis, Roger Federer has always known how to manage notoriety vis-à-vis his children: “For a long time my children had no idea of ​​my successes. They found out from their friends that their father was once world No. 1. They were impressed and surprised. We never made my success an important topic at home.”

Roger Federer and his foundation.

It’s no secret that Roger Federer has always been involved in various humanitarian actions, especially those in favor of children. In 2003, he even created the Roger Federer Foundation which helps disadvantaged people around the world. His foundation, which promotes sport, supports projects in South Africa, Mali and Ethiopia in particular. International Ambassador of UNICEF, Roger Federer never hesitates to make donations to support the world’s populations during natural and health disasters.

On March 18, 2022, the Swiss announced on his social networks that he would donate $500,000 to assist Ukrainian children: “My family and I are horrified to see the photos from Ukraine and we are heartbroken for the innocent people who have been so terribly affected. About 6 million Ukrainian children are currently out of school and we know this is a very critical time to provide them with access to education and we would like to help them cope with this traumatic experience. Through the Roger Federer Foundation, we will support War Child Holland with a donation of $500,000 to promote access to education for Ukrainian children.”

Vivo X80 Lite: premium design and twice the memory of its competition to try to reign in the mid-range

The Prime Minister will award the winning female footballers, they will get houses according to their needs