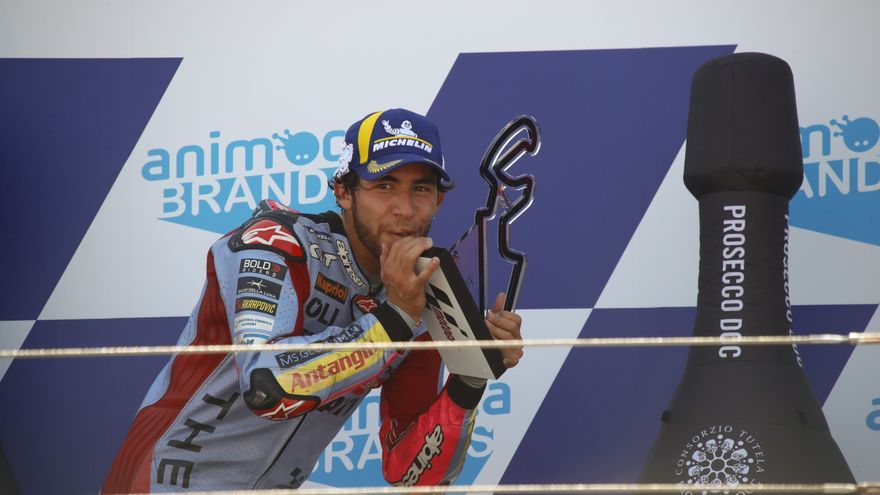 Enea Bastianini, winner of Moto GP 2022 at the Motorland circuit

the italian pilot Enea Bastianini (Ducati) has taken an epic victory in the race of MotoGP of Aragon Grand Prixfifteenth round of the Motorcycle World Championship, after overtaking his compatriot Francesco Bagnaia (Ducati) on the last lap, who together with the Spanish Aleix Espargaro (Aprilia), third this Sunday, he puts pressure for the championship on the leader Fabio Quartararo (Yamaha), who suffered a hard fall after touching a Marc Márquez (Repsol Honda) who had to retire on his return to the World Championship.

‘The Beast’ waited until the final lap, in the corner before ‘Corkscrew’, to put the bike on ‘Pecco’ and achieve his fourth win of the year with 42 thousandths of an advantage over him, a heart-stopping finish for a race that It started with double scare.

On his return to the championship after his fourth humerus operation, Márquez rose from thirteenth to sixth before the first corner, where he edged out Quartararo. The one from Nice was at the wheel of the Catalan in turn 3 when everything went up in the air; Márquez was about to suffer a ‘highside’ and the Frenchman’s motorcycle fell on him, an action that ended with the leader of the championship on the ground.

With the bike damaged, the eighth champion was still involved in a new incident two corners later, before reaching the ‘Corkscrew’, when the Japanese Takaaki Nakagami (Honda) collided with his bike and was left lying in the middle of the track in a very dangerous action in which Maverick Viñales (Aprilia) managed to avoid him.

Despite his ‘zero’, the man from Nice (211) is still at the top of the general classification, but now he has only ten rental points over ‘Pecco’ Bagnaia and 17 over Aleix Espargaró, who get into fully in the fight for the title. The Catalan moved up to podium positions two laps to the checkered flag, after overtaking South African Brad Binder (KTM).

Legends League Cricket: The match of Legends Cricket League was going on in Lucknow, only then the light went off in the stadium…