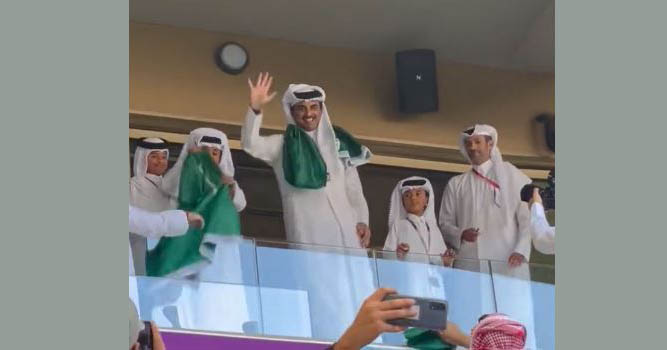 Meanwhile, the emir of Qatar supported Saudi by sitting in the gallery during the match.

In a video tweeted by the Saudi Gazette, Qatari Emir Sheikh Tamim bin Hamad Al Thani is seen raising the flag of Saudi Arabia. Then he held it around his neck. The children with him were also flying the Saudi flag.

Argentina take on Saudi Arabia at the iconic Lucille Stadium on Tuesday. Before the start of the match, who thought that Messi would lose like this. Because Scolani’s disciples had a 100% winning record in four previous appearances.

But the difference between the two teams in the FIFA ranking is huge (Argentina 3 and Saudi Arabia 51). But great placing football, solid defending and excellent goalkeeping by Mohamed Al-Wais, led to a first win against Argentina.

Ball position, on-post shots, corners – despite being ahead in statistics, the outcome of the match was different. After that, the fans of Argentina are looking at their mistakes.

Earlier, Argentina played their first match against Saudi Arabia in Qatar World Cup. In the 9th minute of the match, Argentinian midfielder Leandro Paredes was thrown into his D-box by Saudi defender Al Bulayhi.

Referee decides penalty after watching Video Assistant Referee (VAR). Lionel Messi made a fool of the goalkeeper and took the goal.

After that, the goal was hidden with Argentina. The Albicelestas had the ball in the net of Saudi Arabia three times. But all three goals were disallowed due to offside. As a result, Lionel Scolani’s team went into the break with a one-goal lead.

The opposite happens in the second half. Saudi Arabia equalized against the trend of the game. Saleh Alsehri equalized in the 48th minute (1-1). That’s the goal that Argentina fell. Saudi Arabia stunned the two-time champions before conceding the first goal.

In the 53rd minute, a great goal by Salem Al Dawsari gave the Asian team a 2-1 lead. In the end, Saudi Arabia left the field with a victory in the World Cup, keeping this lead.