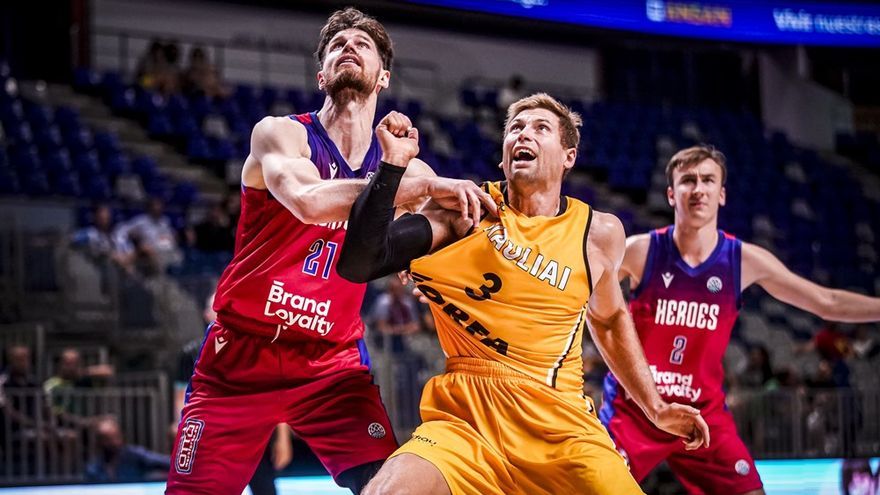 From the late 1970s until well into the 1990s Nashua Den Bosch was a highly respected team in Europe. It was one of those teams that stood out in the basketball scene representing a modest league, the Dutch, like other teams did in Belgium and even Switzerland. They collected national titles and with stars like Tom Baker, Dan Cramer, Mike Reddick or Henk Pieterse, they even managed to play in the finals of the European Cup Winners’ Cup in 1979 and the Intercontinental Cup in 1982. In both cases they fell to a legendary Italian team, Ford Cantú. As a curiosity to say that Joe Bryant, the father of the ill-fated Kobe Bryant, was the author of the basket that gave victory and the world title to the Italians (68-70).

Those times have passed. Refounded in 2005, by merging with Nijmegen, it seeks again the European elite. They are the current champions of their country, but they want more. This summer, like the people from Malaga, they have revolutionized their squad and have signed 7 players, including two of those who stood out on Wednesday against Siauliau, the Australian Naar and the Latvian Kohs.

The reconstruction began on the bench. Last season they snatched from Groningen, dominating Dutch basketball at the time, their coach Erik Braal. They won the league and now they will play in Europe, in the BCL or in the FIBA ​​Europe Cup, to continue climbing the steps in their search for success. Thomas Van der Mars is their most outstanding player. Born in the land of cheese, Gouda, a city of almost 80,000 inhabitants between Rotterdam and Utrecht, he trained at the Canarias Basketbal Academy as the former typesetter Bolo Gerum with whom he would also share the University of Portland in the United States. He is the MVP of the last Dutch league and he was the best against Siauliau.

The control on the track is put by the Australian point guard Enmett Naar. Born in Canberra, he trained at the Australian Institute of Sport, where great Aussie athletes such as footballer Mark Viduka or basketball stars Luc Longley and Lauren Jackson came from. He played at the University of Saint Mary in the United States with former Zalgiris player Jock Londale, now at the Phoenix Suns, and entered the University’s history books by snatching the school assists record from compatriot Matt Dellavedova.

The third great player of this team at the start of the season is the Latvian Vernon Kohs who, coming off the bench, scored 17 points in 19 minutes against Siauliau. He was trained in Ventspils but at the age of 17 he came to the Zaragoza youth academy to play for the linked Simply Olivar of LEB Plata. He was 2 years. After a brief stay in Prague, he would sign for Obradoiro, who would loan him out to LEB Oro’s Ourense, where he played for one season. He has been the last signing of this summer and has only been with the team for 10 days. In 2016 he participated in the Treviso EuroCamp where he met Alberto Díaz, Darío Brizuela and former typesetter Belemene, Karahodzic and Soluade.

Other players to follow are Jito Kok, with a Dutch mother and a Mozambican father, who also went through the Canarias Basketbal Academy and was nicknamed at the University of San Diego as the king of the “Afwijzen”, plugs in Dutch. He spent a year in the LEB Oro with Valladolid where he left a good memory as a very rocky and hard-working center. If you want to laugh for a while you can follow him on social networks. The other great danger of this team is called Austin Price, with more than 13 points and 44% in triples last season, this engineer who loves mathematics and speed is a great offensive weapon. The Norwegian Chris Ebou Ndow completes the roster of the most used players. Born in Bodo, north of the Arctic Circle, he finished last season in the LEB Oro with Basket Coruña.

In short, a good team that, as Ibon Navarro said, can win tonight, although they shouldn’t. Unicaja is superior in all aspects and must prevail in this first final of the year in order to lift this “Carpena Super Cup” on Sunday, which gives way to the BCL.

PS The popular prices that the board has set are a unique opportunity to fill the Carpena, encourage the team and pay tribute to the Malaga heroes of the last Eurobasket. I leave it there.