Davis Cup: The world of tennis looks at Malaga

The Martin Carpena From today it becomes the epicenter of world tennis. 5,300 km from Qatar, where the soccer World Cup absorbs universal sports attention, an exclusive group of eight teams of just five players will play another world title much older than that, that of team tennis, from Tuesday in Malaga. and will crown the champion with an old silver salad bowl known as the Davis Cup.

The most expensive piece of crockery awaits its owner in a final phase directly inaugurated with the quarterfinals, which will unceremoniously send the losers of the clashes home Australia-Netherlands (Tuesday), Spain-Croatia (Wednesday), United States-Italy Y Germany-Canada (Thursday).

First rackets of the circuit like the Canadian Felix Auger-Aliassimewith a splendid season finale (sixth in the world, three titles in October, semifinals in Paris and qualified for the ATP finals), and the American taylor fritz (9th ATP, semifinalist in Turin) will act as a claim for a competition that, however, arrives highly devalued due to casualties. The magic of this competition, which has produced some of the most memorable moments in tennis history, must act as a counterbalance.

Spain will not have numbers 1 and 2 in the world ranking, Carlos Alcaraz Y Rafael Nadalthe first due to injury, the second by his own decision. Alexander Zverev will not be with Germany, nor Jannik Sinner neither Matteo Berrettinand with Italy, nor nick kyrgios with Australia.

Not even Serbia from Novak Djokovic nor the Great Britain of Cameron Norrie.

And to all this is added that the last champion, Russia, cannot defend the crown due to the sanctions that weigh on his country for the invasion of Ukraine. A surprising circumstance since Russian players do compete on the professional circuit, even if it is without their flag, and in fact Daniel Medvedev Y andrei Rublev they have just played the ATP finals and the second reached the semifinals. Russia was the only country with two representatives in that Masters Cup.

Despite the losses of Alcaraz and Nadal, and helped by the fact that they are local, the Spanish team aspires to raise its seventh salad bowl supported by the abundant experience of Pablo Carreno Y Roberto Bautistawho were already champions in 2019, like the doubles player Marcel Granollers.

Captain Sergi Bruguera also called Albert Ramos Already Pedro Martinez to complete a selection that will have a first-rate challenge against Croatia on Wednesday.

The Croats have won the salad bowl twice, the first in 2005 and the second in 2018, still with the home/away format, but they have played in three of the last five finals: 2016, 2018 and 2021. In the absence of the Russians, they can be unofficially considered the defending champions.

Marin Cilic, Borna Coric Y Borna Gojo are their individual tricks, joined by a fearsome pair of doubles that never expires, which form Pavic Matte Y Nikola Mektic. This Sunday they were proclaimed runners-up of the ATP finals. 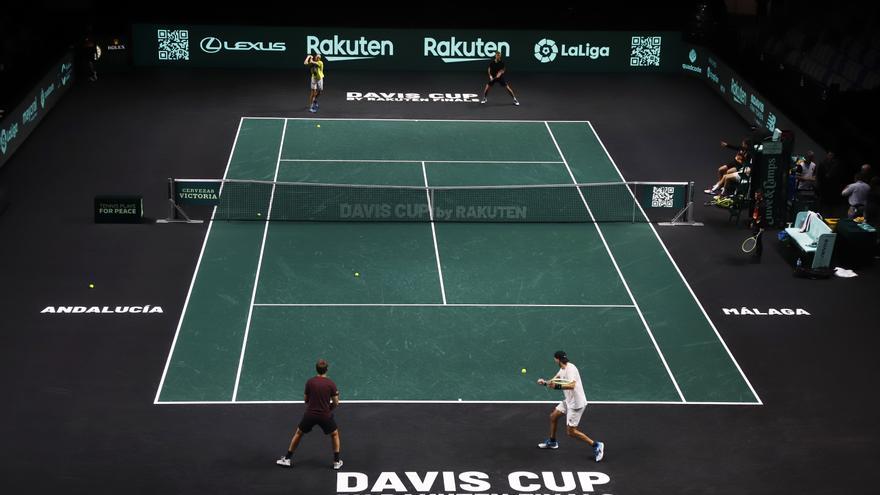 Australia, with Alex de Minaurand the Netherlands, with a Apothecary van de Zandschulp Impeccable in the group stage prior to these finals, they will open fire on Tuesday at the José María Martín Carpena Sports Palace, venue for all the matches -hard surface-. The winner will see them in the semifinals with the winner of Spain-Croatia.

The other quarterfinal matches, Italy-United States and Germany-Canada, will be decided on Thursday.

The Italians, the best academy in current men’s tennis, will miss Jannik Sinner, injured, to put a stop to Taylor Fritz, grown but perhaps also tired after his participation in the ATP finals.

The semifinalist of the Masters Cup will be seconded Frances Tiafoe, Tommy Paul Y Jack Sockin search of a title that they have not won since 2007. There are 32, more than any other team, since the inaugural edition of 1900.

Filippo Volandri debuts this season as Italian captain and maintains confidence in Fabio Fognini, a fixture in the team since 2008, and also bets on the promising Lorenzo Sonego Y Lorenzo Musetti20 years old, who is beginning to be compared to Roger Federer for that ‘easy’ game that triumphs in the most compromising situations.

Matteo Berrettini announced his withdrawal at the last minute due to an ailment in his left foot and Volandri will not call anyone to replace him.

Canada can win its first Davis Cup if Auger-Aliassime makes a point with his discreet performance in Turin, resumes his good moment and transmits his confidence to his teammates Denis Shapovalov Y Vasek Pospisil. The first obstacle for him will be a German team that, without Zverev, has no player in the top 60 in the world. Oscar Otte, 65, debuting this season in Davis, must assume the lead in these conditions.

All matches will consist of two singles matches and, only if necessary, one doubles matchto the best of three sets and with a tiebreak.

The first individual match will face the two players with the lowest ranking among those chosen by the captain; the second, to the numbers one of each formation.

The two finalist teams will automatically access the 2023 finals and the rest will have to play the qualifying round.