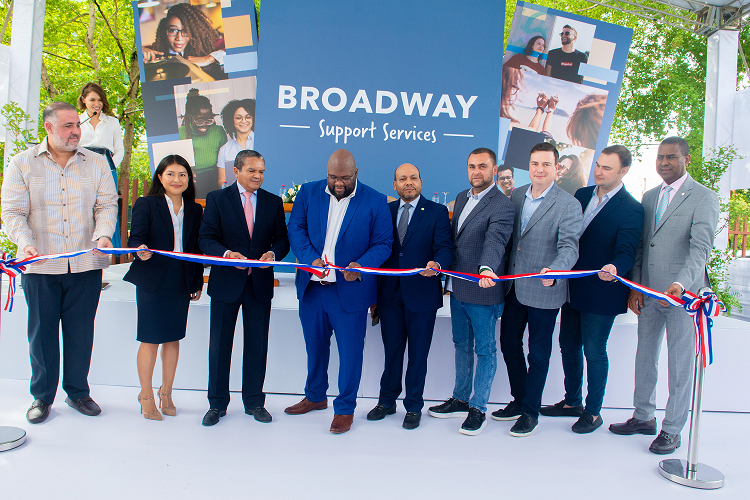 In just one year of operations in the Dominican Republic, Broadway Support Services, a financial services company for debt management in the United States in the form of a special free zone, has contributed to the revitalization of the sector, by generating 400 direct jobs, mainly among bilingual youth in the country.

Also, Broadway Support Services plans to invest some 13 million dollars in infrastructure, as part of its expansion, to continue strengthening its operations in the national territory.

The information was offered during the formal opening ceremony of the company’s facilities, which was attended by its main executives, along with the main authorities of the sector.

Broadway Support Services is part of the National Debt Relief group, a leader in debt settlement in the United States, which has achieved debt settlement for 500,000 clients in that country.

During the inauguration event, Pedro Cuba, Country Manager of Broadway Support Services in the Dominican Republic, highlighted that they chose to establish themselves in the country because they considered it an ideal destination for expanding their operations, taking advantage of the high level of technology of the country’s bilingual talent, considered one of the best in the region.

“Since we started our operations, in September of last 2021, the Dominican Republic has become a fundamental part of our business objectives. We are very happy with the facilities that this market has in the country, in addition to the fact that it has a magnificent geographical position, macroeconomic stability, a wide-ranging telecommunications network and modern infrastructures”, emphasized Cuba.

In addition, he referred to the legal guarantees, public policies and incentives for foreign investment that the Dominican Government promotes with different instances, including the Ministry of Industry, Commerce and MSMEs (MICM).

“For us it is a prosperous, productive and efficient relationship between the private sector and the Dominican Government, since we promote technical work. In addition, we increased the production of net foreign exchange, which affects the country’s competitiveness, one of the main visions of the current management of the Dominican State,” Cuba said.

The executive highlighted that Broadway Support Services promotes the growth and modernization of the young talent that is part of its employees and that, in addition, they have the most competitive salary in the market so that their employees develop their maximum potential and achieve their professional goals.

To date Broadway Support Services has 400 direct jobs; a figure that by 2023 will increase to 600 employees, who will serve as a point of contact with customers from the United States. From the Dominican Republic, this labor force will help obtain answers and accurate solutions of a financial nature to those users who require support with the settlement of their debts.

According to the National Council of Export Free Zones, direct employment levels amounted to 183,232, in 2021, the highest amount achieved in the last 17 years.