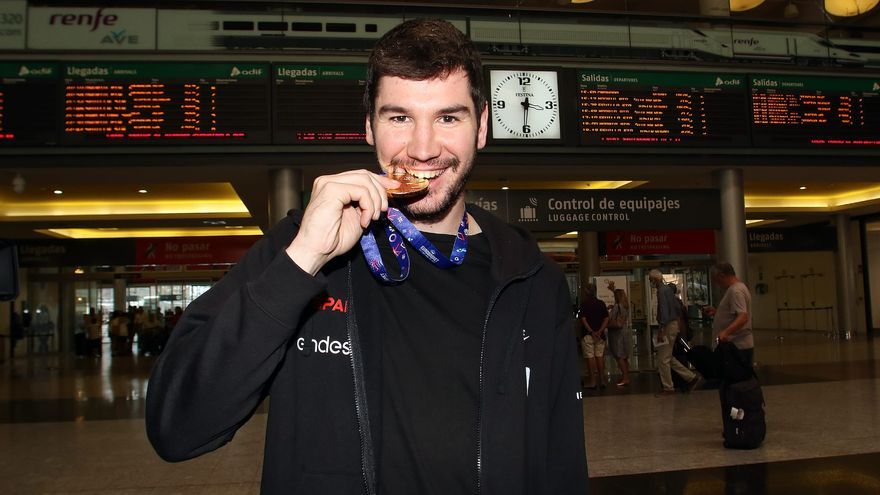 Brizuela: “I tried to do more things than I do here in Malaga”

Darío Brizuela arrived in Malaga early this Tuesday afternoon. Coming from Madrid, the Basque shooting guard proudly displayed the brand-new gold medal he won this past Sunday at the Eurobasket at the María Zambrano station. “I feel a lot of pride and I am very happy for what we have achieved. At first, people didn’t have much faith in us, in preparation we didn’t win many games and even more doubts arose, but the sensations were good from the beginning. After the Belgium game there were a lot of people who jumped on us. It was good for us to continue progressing and to be first in the group”, he explained.

Entering the final list of 12 was not easy for him and that’s how he remembers it: “I was in doubt until the last discards, in the end you’re there and you train for the team, it doesn’t work to fight for the position but to work for the team, I tried to do more things than I do here in Malaga, give that I could to the team so that it could grow. Those unselfish thoughts have led us to be the best team and we have ended up being European champions”, assured the player, who arrived accompanied by the delegate of Unicaja and the national team, Javier Salvoand the physical trainer from Malaga, formerly of the typesetter club, Enrique Salinas.

Brizuela, who always came off the bench in Eurobasket games, explained his role on Sergio Scariolo’s board: “My role was to unclog games and if offensively we were not comfortable, give him something else. I have had a certain freedom and the luck of being successful, if not every day, at least to generate spaces. It wasn’t an easy role either, but it fit my characteristics a lot. I am very happy to have helped to be champions. In a tournament like this you learn things, you see where the next level is, which is something I wanted to check. It is the level to which you aspire as a player and to which you aspire as a club in Malaga. I wanted to see where the level was and fight with them, “he concluded.

Víctor Manuel Vucetich directs the training of Rayados without problems