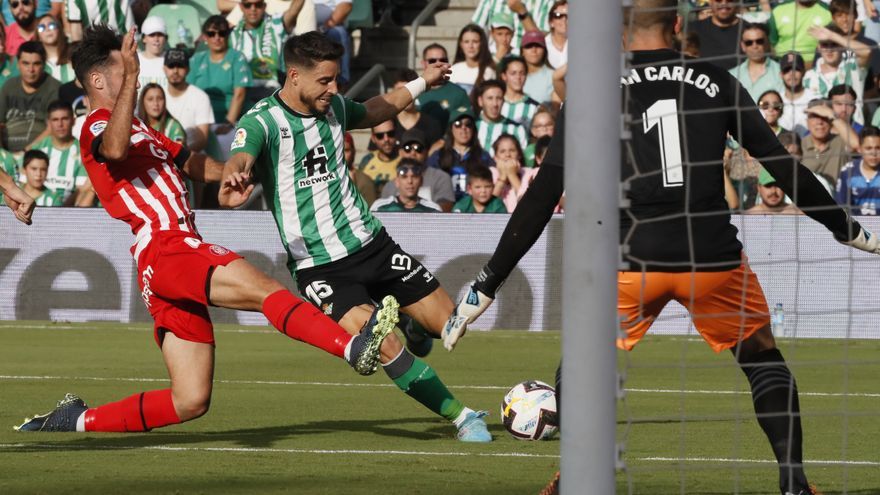 Striker Borja Iglesiaswho this week was called up for the Spanish team, thanked him with two goals, those of the victory of the Betis (2-1) in a match played at the Benito Villamarín in which the local team had to overcome the 0-1 with which Girona took the lead in the first minutes, a rival that gave a great impression but did not know how to do more damage when they played better.

The Galician striker, who has already scored six goals in LaLiga, scored first penalty quarter of an hour and counteracted the one that Arnau Martínez signed for Girona after seven minutes, while in the second, after the visitors missed good chances for 1-2, it was 2-1 in the 71st minute, which It was final, although Manu Vallejo had the goal disallowed, which could have been the tie in extra time for offside.

The Sevillian team arrived at the match perched on positions Champions with a great start to the season and sought to maintain those good feelings during the break due to the commitments of the national teams, and moreover his stadium where he won his previous three LaLiga games and also last Thursday the Europa League game against the Bulgarian Ludogorets.

But to the Andalusian capital a arrived Girona who has returned to the highest category with a good level and without complexes, so the illusion was to fish in the Verdiblanco terrain and not give up what would be his first victory of the course as a visitor.

Chilean Manuel Pellegrini’s team came out intense and in the early stages they eagerly approached the goal defended by Juan Carlos Martín, but in the first one the team coached by Míchel Sánchez from Madrid turned it into a goal.

Arnau Martínez, after a good pass from Miguel Gutiérrez, defined well only against the Portuguese goalkeeper Rui Silva after seven minutes, but Betis did not take long to balance the score, when a penalty was awarded after a quarter of an hour for a foul by the center-back Colombian Bernardo Espinosa to Rodri Sánchez.

Striker Borja Iglesiaswho met last Friday that opens in a call by the national coach, Luis Enrique, He started the penalty play with a heel to his teammate and then converted itwith which he already has five goals in this championship.

The team from Girona, despite the disappointment that meant that they tied him so soon and that he even saw how his coach was expelled after twenty-one minutes for protesting from the band, did not lose focus and maintained the bold approach, to the point that the Brazilian striker Reinier Jesus enjoyed a header without opposition but it came out very innocent and focused at the hands of Rui Silva.

In the second half, as in the beginning of the first, the visiting team soon enjoyed an opportunity to score, but Reinier, after a play by the Argentine Taty Castellanos, found himself with a post from the local goal and this prevented the could his team get ahead on the scoreboard again.

They were a few minutes of verdiblanco bewilderment and more so when midfielder Rodrigo Riquelme had another clear one straight after and Miguel Gutiérrez shortly after also scored, which made Pellegrini react and brought Aitor Ruibal and Brazilian striker Willian José onto the field, who combined the work in tip with Borja Iglesias.

Girona forgave and not Betis, who took advantage of a mistake by a newcomer like Samu Sáiz, who lost the ball to Borja Iglesias so that the Galician striker went alone towards the opponent’s goal and did not forgive only against Juan Carlos.

The 2-1 came in the 71st minutewith plenty of time ahead, but Betis wanted nothing to happen in that time, although Manu Vallejo, who had come out in the final stretch of the second half, gave him a big scare when in the extension of the clash he was annulled slightly offside.

Incidents: Match of the sixth day of LaLiga Santander played at the Benito Villamarín stadium before 52,229 spectators. The Betis players took to the field wearing a support shirt for striker Juanmi Jiménez, who underwent surgery this week for a serious ankle injury for which he will be out for several months