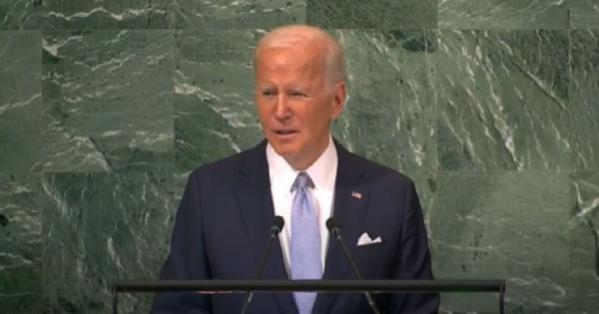 US President Joe Biden targeted Russia in his speech at the 77th General Assembly of the United Nations. Biden reiterated his support for Ukraine, noting that only Russia stood in the way of ending the war.

President of the United States Biden addressed the 77th General Assembly of the United Nations. Commenting on the Russia-Ukraine war, Biden said: “This war is about destroying Ukraine’s right to exist as a state and Ukraine’s right to exist as a people. Wherever you are, wherever you live, whatever you believe. It should make your blood run cold. The United States wants this war to end on fair terms, with the terms we all signed. You cannot seize a nation’s territory by force. Russia is the only country standing in the way of it. We will stand in solidarity with Ukraine. Ukraine belongs to every sovereign nation “We will be in solidarity against Russia’s aggression,” he said.

Biden underlined that there will be no winners in nuclear war. Biden said that Russian President Vladimir Putin threatened Europe with nuclear weapons and said, “President Putin made clear nuclear threats against Europe and tried to prevent the proliferation of nuclear weapons. “Now Russia is calling in more troops to join the war, and the Kremlin is holding a fake referendum to try to annex parts of Ukraine, it’s a violation of UN charter,” he said.

Biden said that they do not want any conflict with China. We don’t want him to choose between the United States or any other partner.