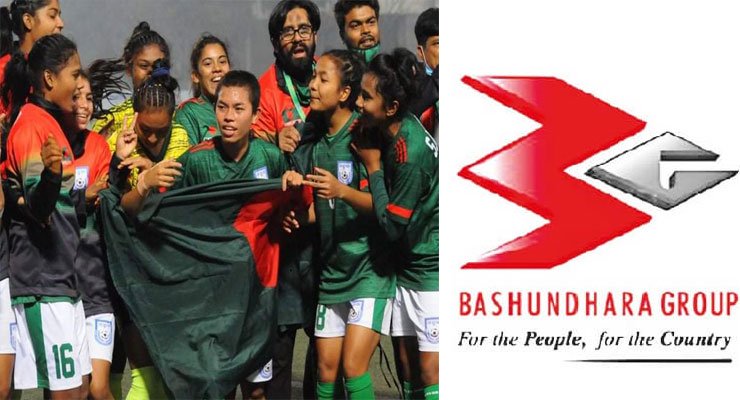 Bangladesh women’s football team is returning to the country on Wednesday after becoming the champion of the clean football from Nepal. Sabina-Sanjidara is returning after conquering the Himalayas. Bashundhara Group, the country’s top industrial organization, has announced that they will be felicitated to encourage them in this success.

Among the 14 footballers of the Bangladesh women’s team who played in the final of the SAFF Championship, 13 were from the Bashundhara Group’s own club Bashundhara Kings. So it is considered that Bashundhara Group has a great contribution behind the achievement of Sabina-Sanjidad along with Bangladesh Football Federation.

Women’s football was largely restricted to age-based tournaments. The national team does not get the opportunity to play international matches. In 2016, two friendly matches were played against Malaysia after SAFF. It was Bashundhara group that mainly helped to build the main national women’s team. The girls got a new lease of life after their own club, Bashundhara Kings, came into the women’s league.

Bashundhara Kings President Imrul Hasan said, ‘Actually, we have managed to bring harmony within the women’s team with the efforts of Bashundhara Group Chairman Ahmed Akbar Sobhan. No one knows how much Chairman Sir loves sports. We work according to the plan he makes to wake up football. Bashundhara Group Managing Director Sayem Sobhan Anveer also gives us guidance.

Imrul also said, ‘As per the instructions of the Bashundhara Group Chairman, we have formed Bashundhara Kings in men’s football. Similarly, under his instructions, the name was written in the women’s league. He used to say that girls should be kept in the field. All of a sudden two matches will be played and there will be no improvement. Bashundhara is taking part in the Kings Women’s League with the importance of her words. Not just the title, our goal is development.’

Imrul said, ‘Basundhara Kings’ roadmap has given some motivation to the girls. See, 15 of the 23 players in the SAF national team are Bashundhara Kings players. And in the final, 13 of the 14 players who played in the best XI were Kings. We are giving these players huge salary, high quality training, facilities. Money is a big factor in motivation. If you are free from worries, you can play freely. So I can say with pride that Bashundhara Kings played a role in winning the title of Bangladesh.

He further said, ‘Chairman sir believes that the girls will continue their success. Bashundhara Group will give a colorful felicitation to the girls who won the women’s championships to give more encouragement and inspiration to football. This event will be held next month. Bashundhara Group Chairman Ahmed Akbar Sobhan will be present there.

Earlier, Imrul Hasan said that Bashundhara Group welcomed the under-19 women’s SAFF champion Bangladesh team. He said, ‘Bashundhara group is working and will continue to develop women’s football. Now others must come forward. With everyone’s efforts, we can dream big.’