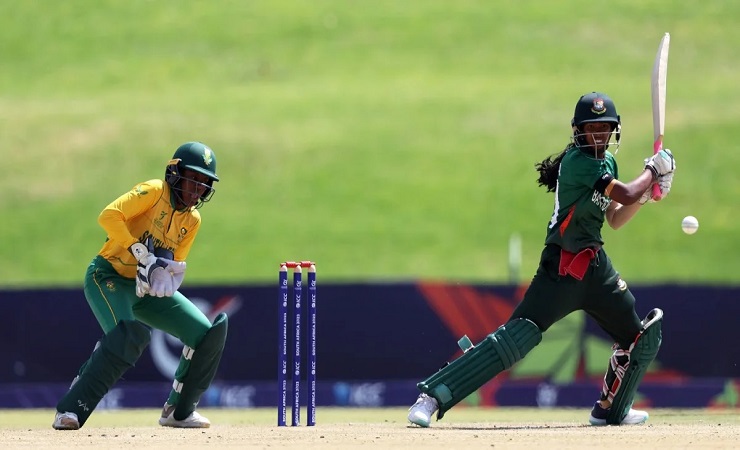 Despite winning three consecutive matches in the group stage, Bangladesh U-19 women’s team could not continue that trend. The girls of Bangladesh started the Super Sixer after losing to the host South Africa by 6 wickets. Batting at the start, Bangladesh scored 106 runs for 6 wickets in 20 overs. In response, the Proteas won with 7 balls and 5 wickets in hand.

The South African girls did not get off to a good start chasing runs. Opener Rensburg was out for 2 runs. Reineke scored only 4 runs in the next wicket. Another opener Simone Lawrence returned 26 runs. Manie Smit could not open the account of runs.

After picking up 4 wickets of the Proteas for just 33 runs in Rabeya Akhter’s spin, Bangladesh dreams of victory. But the hosts got the foundation of victory in the pair of 70 runs made by Madison Lensman and Karabo Meso in the fifth wicket pair. However, Lensman could not leave the field with the victory. He returned for 37 runs. Meanwhile, Meso remained unbeaten on 28 runs and Syo on 1 run.

Before this, Bangladesh team leader Disha Biswas won the toss and decided to bat at the beginning of the match. The two openers started batting at a very slow pace. Mishti Saha was dismissed for 12 runs off 14 balls. Dilara Akhtar scored 17 runs off 20 balls. And 21 runs came from the bat of another Opnor, Afia Pradesh.

Then Sumaiya Akhter and Swarna Akhter batted the team score to touch one hundred mark. Swarna was dismissed for 20 runs off 18 balls. Marufa Akhter didn’t see any runs when he came to play on the next wicket. And Sumaiya Akhter scored 24 runs. Meanwhile, Rabeya Khatun remains unbeaten with 4 runs from 6 balls.