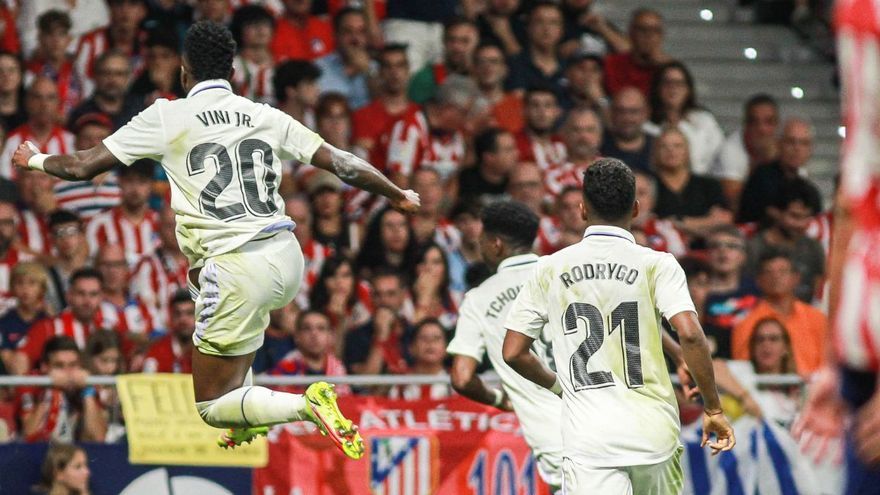 Atlético de Madrid has issued a statement this Tuesday condemning the racist insults received by Vinicius two days earlier, in the minutes before the derby against Real Madrid played at the Civitas Metropolitano. The rojiblanco club highlights his “zero tolerance for racism“, as well as his total “commitment in the fight against this social scourge”.

Atlético’s official reaction comes almost 48 hours after hundreds of radical fans of the mattress club uttered racist chants against the Real Madrid striker near the stadium: “You are a monkey, Vinicius you are a monkey!”.

The club chaired by Enrique Cerezo calls it “inadmissible” these songs from “a minority of fans”, which produce “enormous revulsion and indignation”. “We cannot allow someone to associate our fans with this type of behavior and question our values ​​because of a minority that does not represent us,” the statement said.

Along the same lines, Atlético has promised to withdraw their status as a member of the entity to those radicals who are identified as guilty of shouting those racist insults. Those contempt, as he told THE NEWSPAPER OF SPAINa newspaper that forms part of the Prensa Ibérica group, as well as this medium, they were not sung inside the stadium, The ultras are aware that they are being recorded at all times and that their identification is relatively easy for the authorities.

Atlético claims to have contacted the authorities to offer them their “maximum collaboration in the investigation of the events that occurred outside the stadium”as well as to “demand the identification of the people who participated in order to proceed with the immediate expulsion of those who are members of the club.”

In any case, Atlético also “invites all professionals related to the world of football to carry out a deep reflection”. “Making clear once again our strongest condemnation of these events, which do not have the slightest justification, we believe that what has happened in the days leading up to the derby is inadmissible. The fans are asked for sanity and rationality, and yet , professionals from different fields generated an artificial campaign during the week, lighting the fuse of controversy without measuring the repercussion of their actions and demonstrations”, denounces the Madrid club.

The racist insults against Vinicius will be analyzed at the next meeting of the Anti-Violence Commission, given that several of the organizations present at it, such as LaLiga, have already expressed their intention to also study the events that occurred outside the stadium, given their seriousness.

This same Tuesday, in an interview with the American media Politico, Pedro Sánchez has assured that he is “very sad” for the racist insults to Vinicius, even more so in his capacity as an Atlético fan. “I expected a strong message from the clubs against this type of behavior. This is what I will ask my team”, the President of the Government had commented. I pray that it seems to have been heard in the Metropolitan.