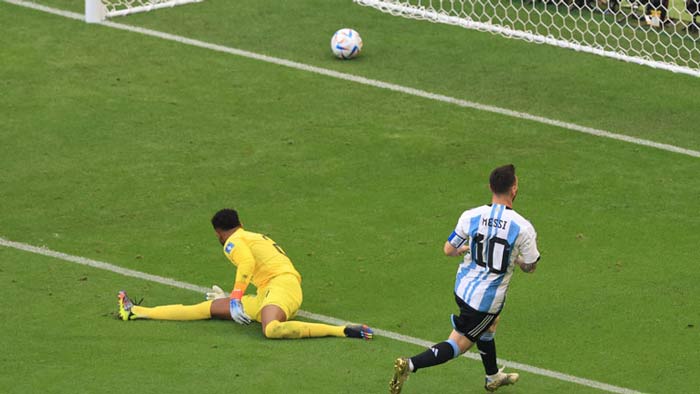 Sports Update Desk: Argentina went ahead in 10 minutes with Lionel Messi’s goal. But since then, the goal has been playing hide and seek with the blue and white. After Messi’s goal against Saudi Arabia in their first match at the World Cup, his team has conceded three more times. However, the team had to go 1-0 at the first half break. The remaining three goals were ruled out for offside.

Saudi Arabian defender Al Bulayhi put Leandro Paredes in danger in the 9th minute at the iconic Lusail Stadium today. After seeing the VAR, the referee gave a penalty. Messi did not make a mistake to score the goal from the penalty. The captain took the goal by sending the goalkeeper the wrong way. Argentina got their first goal in the 2022 World Cup.

Scaloni’s disciples were squeezed by Saudi after digesting the goal. After 13 to 16 minutes, several attacks were made back to back, but due to the lack of organized attacks, the net was never found.

After 19 to 22 minutes, Argentina attacked the Saudi box. After 21 minutes, Papu Gomes took a shot on the Saudi goal. Sky Blues missed the chance when the shot missed the target.

In the 23rd minute, Messi entered the D box alone after receiving a pass from the midfield. After overcoming three defenders and the goalkeeper to find the address of the net, the goal was canceled due to offside.

After 28 minutes, Argentina’s goal was canceled after being caught offside again. Lautaro Martinez gets the ball close to the D box. The Argentinian forward found the address of the net in a single skill by pulling the ball. Once again this goal was canceled due to the offside trap.

At the end of the 35th minute of the match, Lautaro Martinez entered the D box by taking Messi’s pass from the midfield. From there he found the address of the net by velki the goalkeeper with great skill. It too fell into the offside trap.

The rest of the first half was then dominated by Argentina’s attack. In the end no one found the fake address. That is why the two-time World Cup winners had to go into the break with a 1-goal lead.