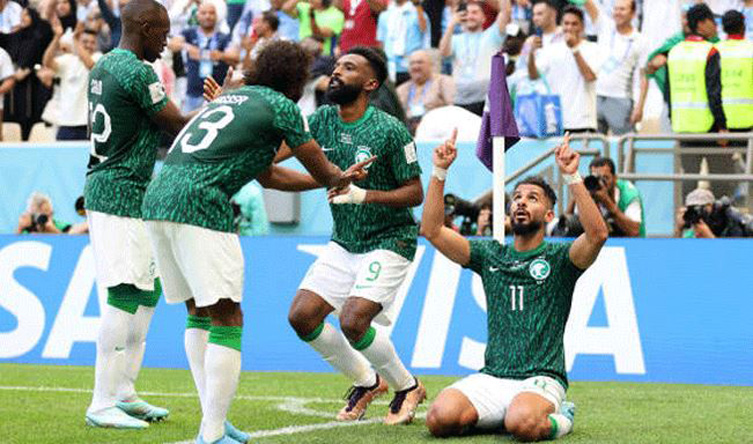 SM Faisal Shamim, Sports Desk: On the third day of the World Cup in Qatar, Saudi Arabia caused a big incident. They beat Lionel Messi’s Argentina, one of the contenders for the title, by 2-1. Although Argentina went ahead with Messi’s penalty goal at the beginning of the match. But after the break, Saudi returned to the match brilliantly.

Argentina suffered defeat in front of their attack. As a result, their record of being unbeaten in 36 consecutive matches also stopped.

Saudi footballers were playing from the beginning of the match. Argentina received a corner kick in the 8th minute of the match. Al Bulaihi pushed Leandro Pardes in the box when Messi took the kick. After that, the referee whistled the penalty after checking the VAR. Messi sent the ball into the net with a perfect shot.

Argentina could have doubled the lead in the 22nd minute. Lionel Messi sent the ball into the Saudi net. But with the help of var it is nullified. Messi was offside. Another goal was disallowed for offside in the 28th minute. Now Lautero Martinez. In the 35th minute, for the third time, Argentina’s goal was disallowed for offside. Again that Lautero Martinez was offside.

Saudi Arabia stunned Argentina in the 48th minute after the break. Al Seheri’s great goal equalized the match after a fatal mistake by the defense. After five minutes, Salem Aldawshari scored with a right-footed shot after receiving the ball outside the box. Saudi leads 2-1. Attack-counter-attack freezes the match. But Messi-Di Maria could not break through the solid defense of Saudi. In the 90th minute, the Saudi goalkeeper blocked Messi’s great shot with extraordinary skill. In return, he has to see a yellow card. In the end, Saudi Arabia left the field with a great victory of 2-1 goals.