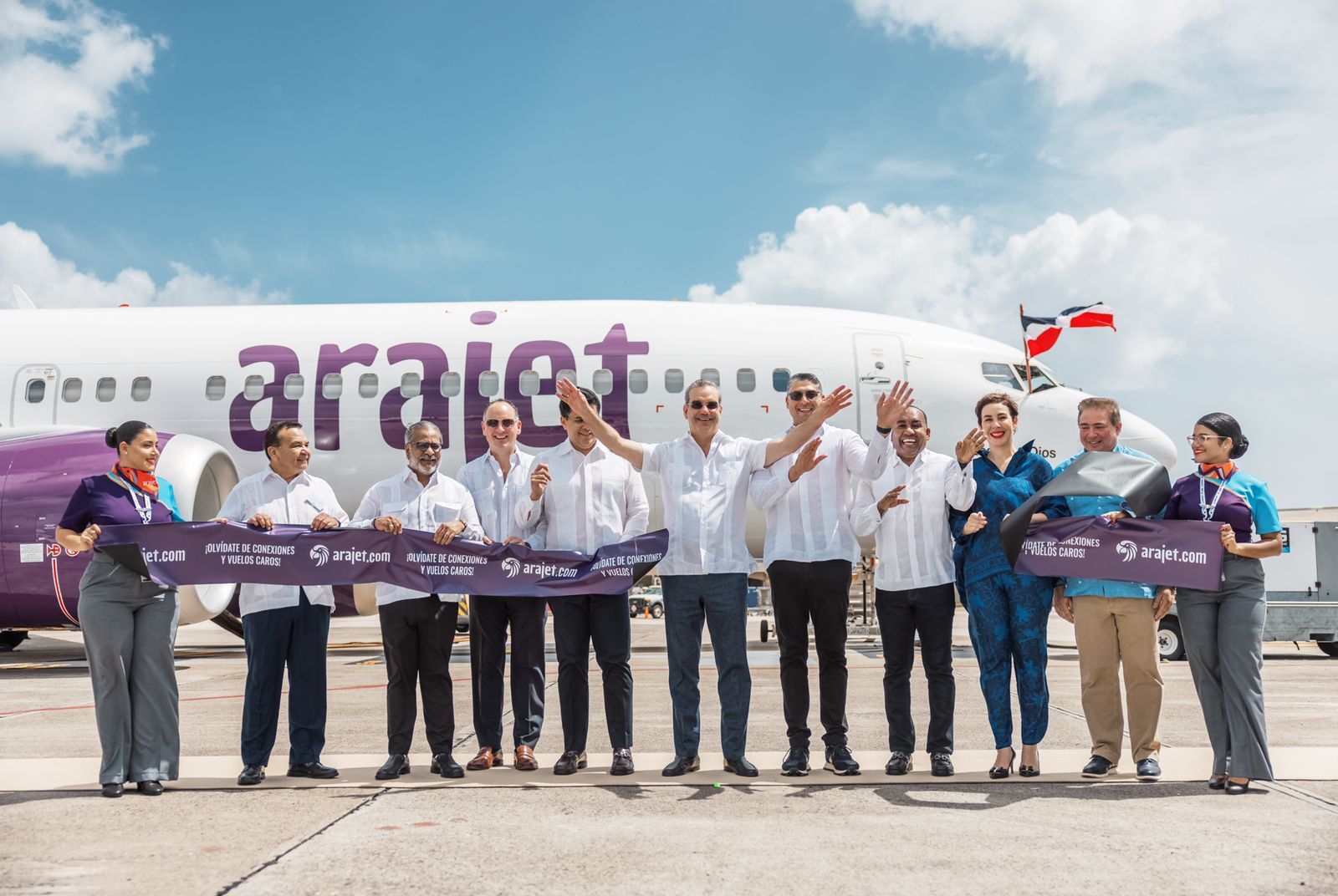 Arajet, the new low-cost airline of the Dominican Republic, officially began its operations, leading the rebirth of Dominican aviation, with a powerful connection hub in Santo Domingo and a robust network that strengthens and democratizes the skies of the Americas and the Caribbean .

The airline officially began its operations with its first flight to San Salvador, in El Salvador, in a joint and historic event led by Luis Abinader, President of the Dominican Republic, and Morena Valdez, Secretary of Tourism of El Salvador. After two days of successful operations with inaugural flights to Barranquilla and Cali, in Colombia, and to Aruba

“Today we congratulate Arajet for this launch that will be for the benefit of all Dominicans: It is a pride to have a new Dominican flag airline and from the government we will be giving all the necessary support so that our aeronautical industry can be as competitive as possible. , and we manage to create an air hub that promotes tourism, trade and cultural exchange, and gives our Dominicans the opportunity to come to their country at low prices”, said the President.

Víctor Pacheco Méndez, executive president of Arajet, highlighted that the low-cost business model and the status of national airline will attract more tourists, increase connectivity and offer Dominicans the opportunity to travel with lower fares, aboard new aircraft. with the highest security standards, with its distinctive and warm Dominican customer service.

“Our mission is to advance Dominican aviation by providing low fares, superior service and connecting Santo Domingo with the main cities of the Americas with a fleet of state-of-the-art aircraft,” said Pacheco Méndez.

Arajet will build a strong route network of 22 destinations in 12 countries in the coming months, proudly flying the Dominican flag and providing customer-oriented service throughout the continent.

In the next 5 years, Arajet plans to transport more than 7 million passengers, generating more than 4,000 direct jobs and about 40,000 indirect jobs in the region.

“Since the Government of President Nayib Bukele, air connectivity is key to boosting tourism, making it easier for travelers to move between countries and discover the wide range of tourism offered by Surf City El Salvador, from the permanent consistency of its surfing waves, its imposing volcanoes, towns and cities with great historical value”, said Morena Valdez, Minister of Tourism of El Salvador.

During September, Arajet will continue to launch operations to Saint Marteen in the Caribbean, Lima in Peru, Mexico City, Monterrey and Cancun in Mexico, and Guatemala City in Guatemala. Beginning in October, Arajet will add Curaçao, San José in Costa Rica, Quito and Guayaquil in Ecuador, Medellín and Bogotá in Colombia, as well as destinations in North America. Arajet expects the Dominican Republic and the United States to reach an open skies agreement to begin connecting North America and the Caribbean with point-to-point flights.

“We are sure that starting today our country will begin to feel the impact that Arajet will have for the benefit of tourism in the country, since it will be contributing to the growth of the industry, attracting more visitors, from destinations to which we did not have a direct connection until today. , which will drive us to continue reaching record numbers in tourist arrivals, and also diversifying the nationality of our visitors with fair rates to connect Santo Domingo with the continent”, said the Minister of Tourism, David Collado.

Arajet enters the market with a solid business model, strategically backed by major global investment firms Bain Capital and Griffin to establish itself as a world-class airline for the Dominican Republic and the Caribbean.

“The 737 MAX family of aircraft is a perfect fit for the Arajet network with the 737-8 enabling profitable new routes and the 737-8-200 providing unmatched efficiencies,” said Landon Loomis, vice president of Latin America, Caribbean & Global. Boeing Policy.

“The flexibility of the 737 MAX ensures that Arajet can meet its goal of democratizing the skies across the Caribbean and beyond, with a safe, sustainable and reliable service.”

Atletico Madrid vs. Real Madrid, where and at what time to watch the Clásico?

IND vs AUS T20 Series: Shock to India before Australia series, Mohammed Shami was out, this bowler got a place